by Tempo Desk
in Boxing, Sports
1 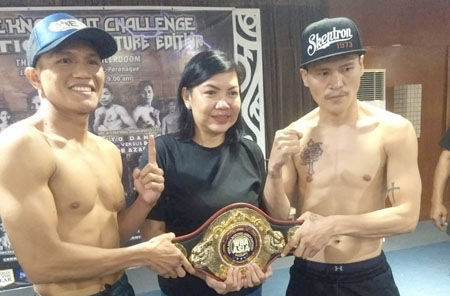 WBA Asia superfeatherweight champion Charly Suarez is looking at campaigning abroad should he win in his upcoming title defense.

The 33-year-Olympian will stake his WBA regional belt against compatriot Mark John Yap Sunday (Aug. 7) at the Elorde Sports Complex (ESC) in Paranaque.

Suarez’ promoter, Australian Robert Hill is planning to stage an international event in Vietnam before the end of the year to be topbilled by the bemedalled former national team standout.

“This is a very important fight because I need to keep on winning to improve my world rankings and also keep my unbeaten record intact,” said Suarez who tallied 129.2lbs in Saturday morning’s weigh in.

Yap (30-16, 15 KOs) lost his last three bouts against opponents with a combined record of 29-0 but all those defeats, two of which happened in Las Vegas while the other one in Dubai, ended via decisions, a testament to the 33-year-old boxer’s staying power.

Yap also came in at 129.2 during the weigh in held at the Grand Ballroom of the ESC.

“I know he is eager to take my belt and is also looking at campaigning abroad once more should he beat me. With God’s grace I will make sure victory will be mine Sunday night,” said Suarez.

The Suarez-Yap 12-round tussle will serve as the main event of a 20-fight promotion dubbed “UKC Tiger Annihilation” promoted by Cucuy Elorde.