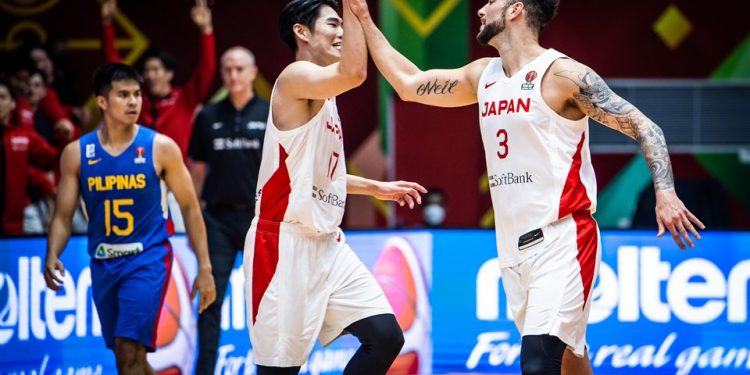 Japan ended years of futility and eliminated Gilas Pilipinas with a convincing 102-81 victory in their knockout match in the FIBA Asia Cup 2022 at the Istora, Senayan in Jakarta, Indonesia on Wednesday, July 19.

The Akatsuki Five proved to be the better team this time around as they rode a blistering start in the opening frame to cruise to the 21-point victory and effectively ended Gilas’ domination over Japan in FIBA-sanctioned events since 2013.

Not even an ankle injury to Japanese star and NBA player Yuta Watanabe in the third frame could hinder the demolition of the Filipinos as Yuki Togashi carried the load for the Akatsuki Five, finishing with 18 points built on five triples while naturalized player Luke Evans threw his weight around inside the paint with 17 points and seven rebounds.

Watanabe already had 15 points and nine rebounds before he tweaked his ankle early in the third frame.

Japan B. League imports Ray Parks Jr. and Kiefer Ravena paced the Filipinos with 16 and 15 points, respectively, although their efforts went futile as Gilas failed to recover from another horrendous first quarter where the Japanese built a 16-point lead, 32-16.

The Filipinos showed some signs of life in the middle quarters, even engaging the Japanese in a series of shootout in the third frame but just couldn’t get the much-needed push to get past the double-digit barrier the Akatsuki Five had put up in the first half.

A back-breaking 13-2 run in the final frame proved to be what Japan needed to take the fight out of Filipinos, turning the once 12-point lead, 79-67, into a massive 92-69 advantage with a little over five minutes left in the game.

With the loss, Gilas missed the Top 8 of the regional showpiece for the first time in 15 years or since the nationals finished ninth in the 2007 edition in Tokushima, Japan.

2 more weightlifters from Zamboanga bag 3 golds each in

2 more weightlifters from Zamboanga bag 3 golds each in