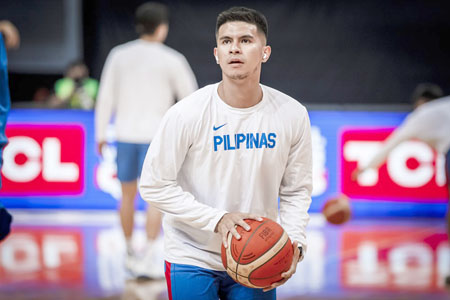 Gilas Pilipinas absorbed another beatdown, this time suffering a 92-75 defeat at the hands of New Zealand to wrap up the group stage of the 2022 FIBA Asia Cup at the Istora Senayan in Jakarta, Indonesia on Sunday, April 17.

Just like in their opening game loss to Lebanon, a series of scoring droughts dimmed the chances for the Filipinos to pull off a monumental upset that could have put the nationals into a much easier route to the quarterfinals.

The crucial loss forced Gilas to take a tough road instead and will now face a hot-shooting Japan side led by NBA player Yuta Watanabe after finishing third in Group D with a 1-2 record.

The Akatsuki Five meanwhile was the second seed in its group with a 2-1 record.

Kiefer Ravena tried to carry the fight for the Filipinos with 17 points, six rebounds and three assists while young guns Kevin Quiambao and Carl Tamayo continued to provide on the offensive end, finishing with 14 points apiece while holding their own against the bigger and heftier Tall Blacks.

Flynn Cameron led the Kiwis’ domination of the Filipinos with 18 points while Taine Murray provided support with 16 spiked by four triples.

The Filipinos started out flat as they fell behind early 20-8.

Gilas though behind Kiefer and Quiambao battled back in the second frame and cut the lead down to just five, 43-38, before the Tall Blacks settled for an eight point lead at the half, 46-38.

New Zealand, however, imposed its will inside and pulled away in the third after Gilas, once again, entered a dry spell and just couldn’t buy a basket.

It was during that stretch where the Tall Blacks managed to rebuild a double-digit spread which they never relinquished until the final buzzer.