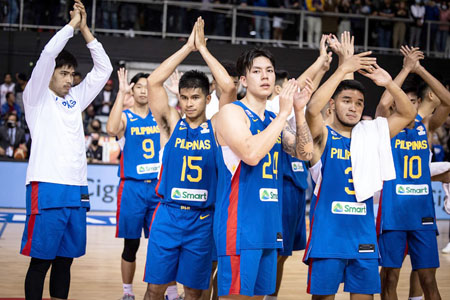 Gilas Pilipinas is expecting a grind out game when it figures in a crucial tiff against India in FIBA Asia Cup Friday at the Istora Senayan in Jakarta Indonesia.

The Filipinos are taking the match as if it’s the championship game since the winner of the crucial encounter will most likely advance to the next round while the loser will get eliminated. Tip-off is at 4 p.m. Manila time.

Both squads are coming off tough losses in their first assignments with Gilas falling to Lebanon, 90-85 while India got utterly destroyed by New Zealand, 100-47.

A horrendous second quarter spelled doom to the Filipinos in their opening game as that allowed Lebanon to get on their offensive groove eventually building a 22-point lead which proved to be too much to overcome for the Filipinos despite their repeated rallies.

Team captain Kiefer Ravena refused to dwell on the loss while also stressing the need for the team to bounce back in the next game to keep their tournament hopes alive.

“We have another chance, another opportunity to bounce back and now our championship game is our next game against India and we have to prepare mentally, physically for another grind out game,” said Ravena.

“We played against India but I think it’s a different team right now that they are sent here in the FIBA Asia cup so we have to be really tough and mentally prepared coming into the game,” he added.

Despite the loss to Lebanon, Gilas coach Chot Reyes for his part, found a silver lining on Gilas’ late 14-1 run that cut the once 22-point lead to just nine midway through the final frame. That should be a momentum Gilas could build on heading into the India game.

“Unfortunate that the result turned out this way, but I thought we made a great run,” said Reyes. “We never quit even when we were down by almost 20 points in the fourth. We made a great run to get within single digits midway through the fourth quarter.”

India is no pushover despite the 53-point drubbing from the Tall Blacks. It will rely heavily on its NBA Academy prospects led by Pranav Prince who top scored the team in the loss to New Zealand with 13 points while Arvind Kumar Muthu Krishan added 10.

In the third window of the FIBA World Cup Asian Qualifiers, the Filipinos handily beat the Indians, 79-63, led by the 21 points of Dwight Ramos.

Ramos, unfortunately, was out of the FIBA Asia Cup due to a leg injury but fellow B.League imports Kiefer and Thirdy Ravena and Ray Parks Jr. are expected to carry the load.

India was then led by Muin Bek Hafeez who scored 13 points against the Filipinos.