Filipinas out to reaffirm mastery vs Singapore; bigger crowd expected

by Tempo Desk
in Soccer, Sports
2 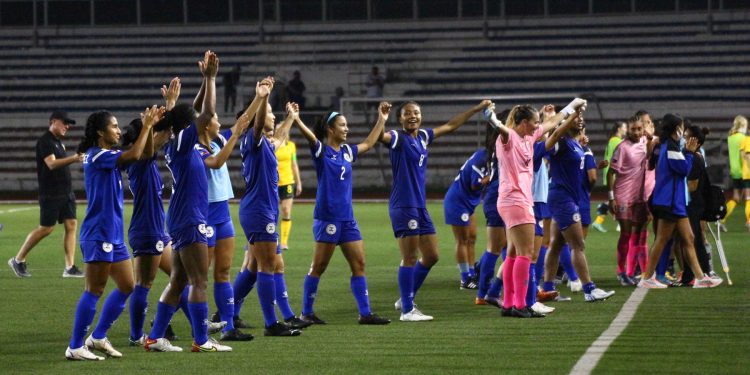 The Filipinas, including Sarina Bolden (7th from left) celebrate their massive 1-0 win over the fancied Aussie squad before a motley crowd at the Rizal Memorial Football Stadium Monday night. (AFF/PFF)

The Philippine national women’s football team tries to put a fitting sequel to its massive win over the fancied Australian side when the Filipinas battle the Singaporeans Wednesday in the 2022 AFF Women’s Championship at the Rizal Memorial Football Stadium.

Emboldened by their stunning 1-0 win over the under-23 team of Australia, the Filipinas (formerly Malditas) are expected to play with more zest and sharpness in their 7 p.m. tussle with the Singaporeans in Group A.

Celebration is over for the Filipina booters though as head coach Alen Stajcic and the rest of the members go back to the drawing board and focus on what lies ahead.
“Obviously it was an amazing result against a team (Australia) that has been ranked in the top 10 for the last 10 years. The performance of our players was first class,” said Stajcic in a post-match press conference. “We really enjoyed the win but tomorrow it’s back to business.”
There’s no room for complacency for the Philippines, ranked at No. 53, as well despite the Singaporean side being at No. 132 in the world rankings.

Though in the past two editions of the tournament, the Filipinas made quick work of Singapore with 4-0 and 3-0 domination in 2019 and 2018, respectively.
Meanwhile, all eyes will still be on veteran Sarina Bolden, who made the lone goal of the match against Australia and provided the first win for the Philippines off a header at the 60th minute mark last July 4.
While Bolden keeps her focus in each game, she is also preparing for the long haul when the FIFA World Cup kicks off next year.
With a good start and the right amount of energy, despite the continuous drizzle, both Stajcic and Bolden encouraged more Filipino football fans to watch live and support the national team at the Rizal Memorial Stadium.
“This team really deserves a sell-out crowd and we have four more games in the group, plus the semis and finals if we make it there,” said the Australian mentor. “We need to fill the stadium and give the players the love they deserve.”
The Aussies, for their part, try to bounce back from their loss against co-leader Thailand at the same venue at 4 p.m. while Malaysia hopes to get the victory this time over at the City of Imus Grandstand in Cavite against Indonesia at 7 p.m.
Thailand earlier routed Indonesia, 4-0, to share the top spot with the Philippines and get three points while Malaysia and Indonesia settled for a scoreless draw.

Gin Kings eye win No. 6 vs Dyip; ROS vs Meralco

Gin Kings eye win No. 6 vs Dyip; ROS vs Meralco