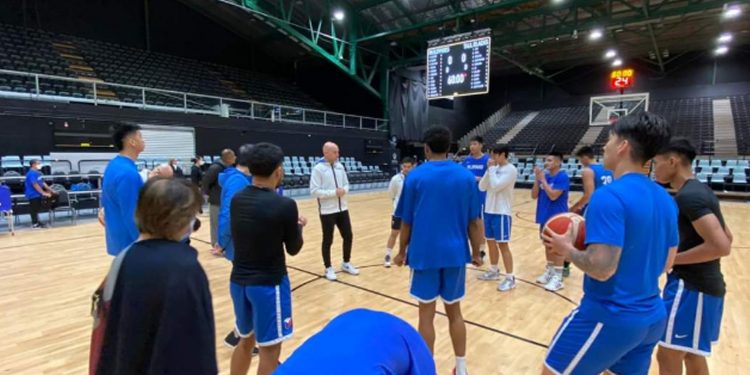 Gilas during a training session. (SBP)

The Gilas Pilipinas men’s senior team will have a tall order when it slugs it out with New Zealand in the third window of the 2023 FIBA World Cup Asian Qualifierson its home turf Thursday at the EventFinda stadium in Auckland, New Zealand.

That’s because Gilas coach Nenad Vucinic will have only 11 players at his disposal for this window after naturalized center Ange Kouame suffered a meniscal sprain and partial ACL tear.

And the bad news?

The Tall Blacks will be parading five players from their 2019 World Cup team.

Leading the way for the nationals are Dwight Ramos and Kiefer Ravena while NCAA Season 97 MVP Rhenz Abando is set to make his debut in the national tri-colors.

New Zealand, on the other hand, will be led by Corey Webster, Shea Ili, Finn Delany, Jordan Ngatai, and Tohi Smith-Milner all of them saw action in the World Cup while six other players were also retained from its lineup from the previous window including Dion Prewster and Tom Vodanovich who led the Tall Blacks in their 88-63 victory over the Filipinos at home last February.

In that match, Prewster and Vodanovich scored 20 points apiece and provided the one-two punch for New Zealand to stomp Gilas which was then led by Thirdy Ravena and Ramos with 23 and 18 points respectively.

Despite the daunting task of taking down a much-bigger New Zealand team, Vucinic said his young crew must prove that they can compete among the best in the international level of play.

“We’ve got a young team here and it’s up to them to prove that they can play at that level and that they can play important games like these two qualifying games,” said Vučinić who will be coaching against the team where he spent his time as a player late in his career and his early days in coaching.

Even without Kouame, Gilas managed to hold its own against the Korean national team in its two close losses in their friendly games last month.

Navarro, Tamayo, Chiu and Quiambao held the fort during those games and will be tasked to the same against New Zealand while Ravena, Ramos and Abando are expected to take the scoring cudgels for the Filipinos.