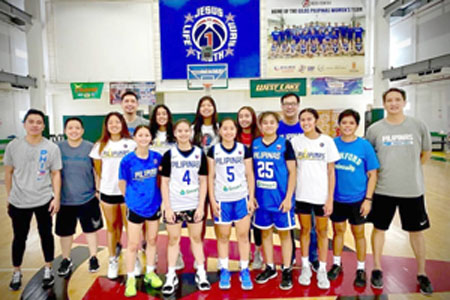 Kristan Yumul sizzled with nine three-pointers as Gilas Pilipinas U16 girls team avoided a huge meltdown against Syria, 92-86 in the FIBA U16 Women’s Asian Championship at the Prince Hamza Arena in Jordan on Saturday, June 25.

Yumul waxed hot from almost all angles to finish with 33 points built on a scintillating 9-of-14 shooting from beyond the arc – none bigger than the last one, a tough step-back three pointer she drilled over her defender to cap a crucial 6-0 spurt that gave Gilas an 88-82 cushion with 1:16 left in the game.

The shot prevented what could be a huge collapse on the part of the Filipinas who surrendered a 20-point advantage it once held late in the first half.

It also atoned for Yumul’s earlier miss that could have broken an 82-all deadlock with 2:21 remaining in the game.

Fortunately for Gilas, Ramos was at the right place at the right time as she collared the offensive board before scoring on an and-1 play on the put back, triggering the telling run.

Gabby Ramos, after a monster 27 points, 20 rebounds outing in her debut, provided support with 21 points and 14 rebounds while Natalie Panganiban was the other double-digit scorer for Gilas with 13.

The Filipina cagebelles led by as much 20-points 47-27 late in the first half. The Syrians however rallied back in the third frame and cut the lead down to just 10, 73-63 heading into the final frame.

Behind the one-two punch of Suzan Backour and Simel Alahmar, who paced their team with 28 and 20 points respectively, Syria completely erased the deficit and tied the game at 82-all with 2:45 left. That, however, only set up the table for the heroics from Ramos and Yumul as the Filipinas finished the contest with a 10-4 run.

Gilas currently sits atop the Group A standings with a 2-0 record and a victory against Samoa on Sunday would assure the Filipinas top seed finish and an outright semifinals berth in the playoffs.