Italy too classy for Germany in VNL men’s leg 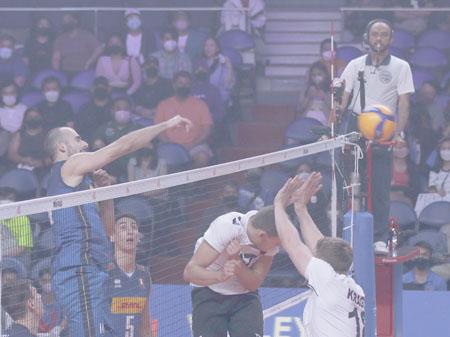 Italy displayed its might and mauled Germany, 25-16, 25-21, 25-22, Wednesday night to start its Week 2 campaign on a high note in the Volleyball Nations League Men’s Leg at the Smart Araneta Coliseum.

The Italians attacked the net with impunity anchored on Yuri Romano and Gianluca Galassi to clinch their fourth victory in five games for 12 points in third place.

Romano pumped in 13 points on 10 kills while Galassi chipped in 11 points including seven hits for Italy, which dictated the tempo for most part of the match.

But it proved to be Germany’s last stand as Italy launched quick attack plays.

Linus Weber was the lone double-digit scorer for Germany after pouring all his 14 points on attacks, while Lukas Maase and Tobias Krick teamed up for 12 points.

The Germans fell to their second defeat against three victories for seven points in seventh place.