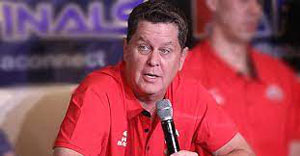 Ginebra head coach Tim Cone said he has no interest in trying to land a coaching job in the NBA despite being invited to be part of the Miami Heat coaching staff for the Summer League.

While the stint was admittedly a dream come true for Cone, the veteran mentor insisted that he will only be joining the Heat team as guest coach and will only be there to gain valuable knowledge that hopefully he apply when he comes back to Ginebra.

“Coach Spo knows me that I’m not interested in that if I was I think he wouldn’t allow me to do it. This truly a guest coaching thing. I’m not being paid. I’m coming home four games I’m coming home,” stressed Cone.

Cone will be one of the deputies of head coach Malik Allen from July 7 to 18 in San Francisco and Las Vegas and he is excited to get a glimpse of how coaching is done in the NBA.

“For the first time, I might get a small preview of what goes on in that locker room and that to me is most exciting.” said Cone. “The team is gonna come together and those players do not know the system, so the coaching staff is gonna have to build that. So that’s something I’m gonna be able to observe, watching them build that foundation, so those are the things that are really exciting for me from the coaching standpoint.”

“It’s a dream come true, the bucket list for me so I’m excited to do it,” added Cone who also revealed that the stint was actually a long time coming and was only delayed due to the Covid-19 pandemic.

Cone shared that it was Heat head coach Erik Spoelstra who invited him to do it after Jimmy Alapag also became an assistant to the Sacramento Kings in 2020.

Italy too classy for Germany in VNL men’s leg