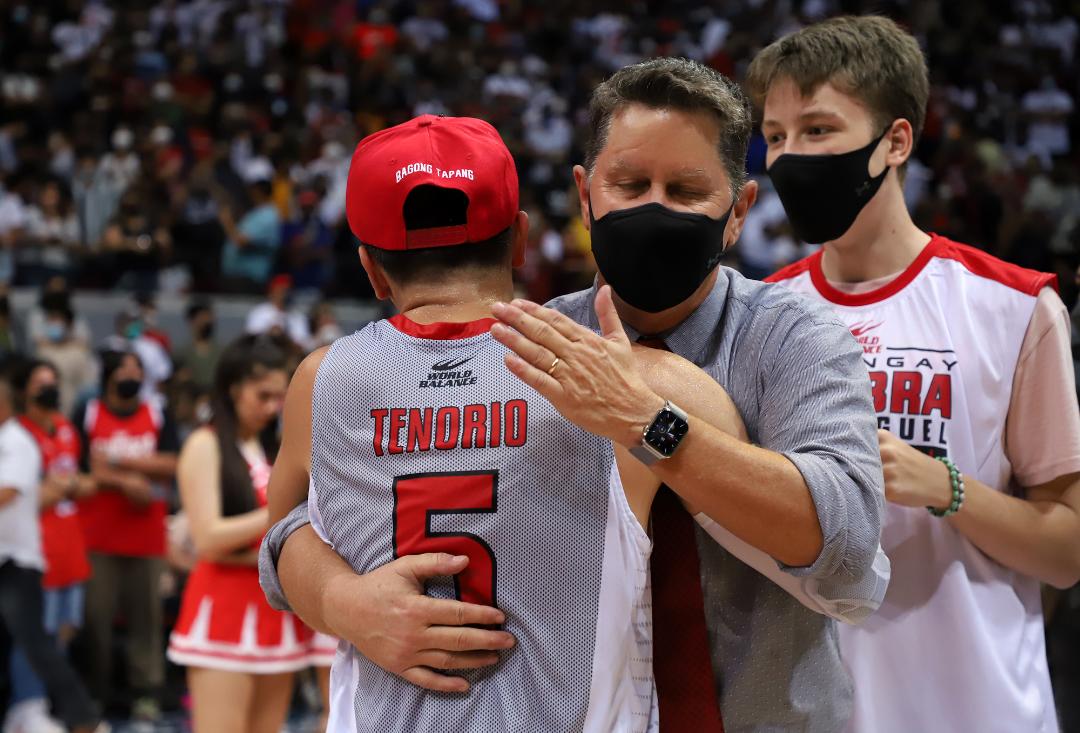 Barangay Ginebra San Miguel coach Tim Cone is hoping that the absence of Justin Brownlee for the PBA Philippine Cup can be offset by the growth he saw from his players during their recent title run.

The Gin Kings will come into the opening salvo of the league’s 47th season in high spirits after bucking early struggles and injuries to capture the Governors’ Cup crown.

But with Ginebra having to do it on its own sans Brownlee for the All-Filipino tourney, Cone acknowledged that there could be some speed bumps on the horizon.

“It’s always hard for us to go into the All-Filipino conference after playing with Justin because you know, he just does so much,” Cone said. “It’s a huge adjustment. So I think it’ll take a few games to just get everything going.”

Ginebra has won five of its championships under Cone with Brownlee providing plenty of winning moments.

The other title won minus Brownlee was in the 2020 Philippine Cup bubble, and the Gin Kings out to regain temporary possession of the Jun Bernardino Perpetual Trophy.

For that to happen, Ginebra is looking to get the same form from the likes of Christian Standhardinger, Nards Pinto and Arvin Tolentino, whose contributions were vital during the Governors’ Cup title run.

The most obvious rise is Scottie Thompson, among the favorites to capture the Season 46 Most Valuable Player award.

“I think there’s a part of that that’s really true,” Cone said when asked if the confidence gained from the last conference can bode well into the new campaign.

“Obviously I saw a lot of development from Scottie, that’s No. 1. His development has skyrocketed. Arvin’s been a little inconsistent, but I think the more he plays, the more consistent he has become.

“Nards Pinto is a real presence for us, obviously, and I think that (backup center) Prince Caperal will now step up and play a lot better now he has the extra time in the All-Filipino.

Their valuable efforts came despite missing Stanley Pringle for all but one game last conference after hurting his knee and Japeth Aguilar playing through an injured calf in the Finals.

Both Pringle and Aguilar are expected to be back in time for the season-opener as the two are also tasked to make up for some of the things Brownlee had done.

“We won’t have Justin and that is always a huge, huge adjustment,” said Cone. “When you have a super import like that, and then you just pull him away, there’s a lot of void that has to be filled.

“Hopefully, Stanley can come back to 100 percent and fill some of that void. The development of Christian and Japeth playing together a little bit more will be part of filling some of the void left by Justin,” he added.

Cone still has enough leadership to rely on led by LA Tenorio but will come in without the retiring Joe Devance and Mark Caguioa, who according to the Ginebra coach has decided to quietly hang it up after more than two decades in the league.

While the season starts Sunday, June 5, Ginebra won’t be playing until a week later on Independence Day when it plays Blackwater at the Ynares Center in Antipolo City.