Celtics beat Warriors in Game 1— thanks to dazzling comeback 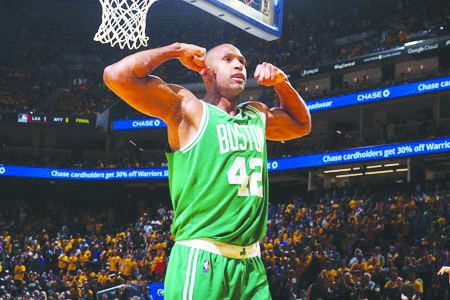 Celtics veteran Horford scored 26 points, including 11 in the fourth quarter, as Boston inflicted Golden State’s first home defeat of the post-season at their Chase Center fortress.

Horford’s tally included what turned out to be a decisive burst of eight unanswered points in the fourth quarter as the Celtics pulled clear having trailed by 12 at the end of the third period.

Boston defensive linch pin Marcus Smart also came up big late on with back-to-back three pointers as the Celtics surged into a double-digit lead against a shellshocked Warriors.

The victory was no less than Boston’s gutsy never-say-die approach deserved in a full-blooded contest that resembled a heavyweight title fight, full of wild momentum shifts, twists and turns.

“Just continue to play. That was our message throughout the whole game,” Horford said afterwards.

“They’re such a good team. And for us, it was just, you know, continue to play no matter what. That’s what we did.

“It wasn’t our best game, but we continued to fight and find different ways to get this win.”

Boston twice recovered from double-digit deficits either side of halftime when it looked as if the Warriors were poised to cut loose.

Not even a dazzling shooting display by the Warriors’ Stephen Curry — who exploded for 21 points in the first quarter alone including a record six three-pointers — could fluster the Celtics.

Despite a vastly less experienced line up — not a single player on the Boston roster had played an NBA Finals game before Thursday — the Celtics refused to crack under pressure.

Instead it was the Warriors whose resistance crumbled in a fourth quarter that saw the home side outscored by an astonishing margin of 40-16.

“That’s kind of who we’ve been all year,” Celtics coach Ime Udoka said.

Boston’s win was all the more notable as it came with only a modest contribution from star Jayson Tatum, who finished with 12 points and 13 rebounds.

“Those guys, give them credit,” Kerr said.

“My gut reaction, what I just witnessed, they came in and played a hell of a fourth quarter, and you have to give them credit. It’s pretty much as simple as that.”

Curry led the Warriors scorers with 34 points while Andrew Wiggins finished with 20 and Klay Thompson 15.

Otto Porter Jr. had 12 off the bench, but the Warriors were left ruing their catastrophic fourth quarter when they made just seven of 17 from the field.