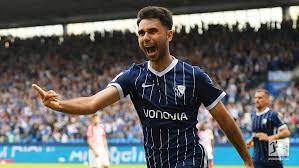 Thirty players have been called up to be part of the Philippine Azkals’ training pool ahead of the 2023 AFC Asian Cup Qualifiers slated June 8 to 14 in Ulaanbaatar, Mongolia.

German Bundesliga standout Gerrit Holtmann along with veterans Neil Etheridge and Stephan Schrock were among those named by management to be part of the preparations that will be handled by returning coach Thomas Dooley.

Wrapping up the list are naturalized player Bienvenido Maranon, Kevin Hansen, Jefferson Tabinas, Jesse Curran, Jhan-Jhan Melliza and Matthew Nierras.
The list, however, is no indication that it will be the Azkals’ final squad for the last phase of the continental qualifiers since some players may end up unavailable for various reasons.
Dooley is back for his second tour of duty as Azkals coach and will be tasked to steer the Philippines to a spot in next year’s Asian Cup.

The Azkals are in Group B with Palestine, Yemen and host Mongolia.