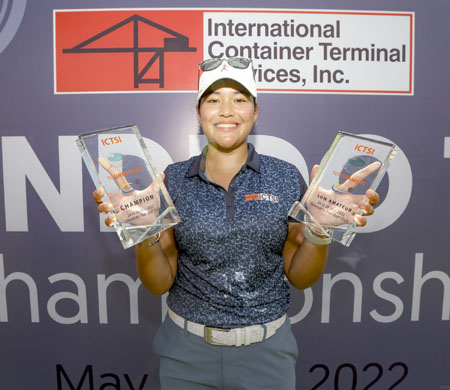 LAUREL, Batangas – Foiled in her crack at a pro crown at least four times, amateur Mafy Singson finally nailed the elusive win, holding off Sunshine Baraquiel, Chanelle Avaricio and Harmie Constantino to snare the ICTSI Splendido Taal Championship by one on a 71 in hot conditions here yesterday.

Not even a bogey-bogey skid from No. 14 could stymie the rising Davaoeña star’s stab at the Ladies Philippine Golf Tour glory as erstwhile leader Baraquiel faded with double bogeys on Nos. 13 and 14 and blew a two-stroke lead and Avaricio and Constantino fell short of their playoff bids with pars on the last two holes.

“I didn’t really expect to win. I want to catch up with them (pros) and it was really a close fight, especially at the back,” said Singson, who battled back from two down, went two-up after Baraquiel’s misses and held sway the rest of the way with gutsy pars to prevail with a 215 total.

But those of her rivals’ didn’t drop as well, enabling the member of the team that snatched the bronze in the recent SEA Games in Vietnam to emerge on top after putting herself in title contention in at least four LPGT events last year.

But late-hole stumbles kept the 17-year-old shotmaker out of the top podium finish while settling for low amateur honors.

But with 71 and 72 in the first two rounds of this P750,000 event put up by ICTSI, she stayed in the hunt, bounced back from a bogey on No. 2 in the final round with birdies on Nos. 3 and 4, fell by one as Baraquiel birdied the 10th but surged ahead as the latter fumbled with her first double bogey coupled with Singson’s birdie on No. 10.

“I learned a lot from the them (pros),” said Singson, whose victory augured well for her next campaign in the US Girls’ Junior qualifying and in a number FCG tournaments in the US.

The victory also netted Singson another low amateur honors that won her an IPad Pro 11 with Constantino, Avaricio and Baraquiel splitting the combined P204,750 purse.

Meantime, Clyde Mondilla kept the men’s division of the event under control despite a late frontside stumble, recouping at the finish to salvage a 72 and move 18 holes away from ending up on top after back-to-back runner-up finishes on the Philippine Golf Tour.

But an uncharacteristic triple-bogey on the par-5 No. 9 nearly ruined the day of the stocky Del Monte ace, who birdied Nos. 3 and 10 then bounced back with back-to-back birdies from No. 16 from close range after dropping another stroke on the 14.

From seven-up over Tony Lascuña halfway through the P2 million event, Mondilla saw his once formidable lead reduce to two with a 14-under 202 aggregate as Guido van der Valk took the challenger’s role with a solid eagle-spiked 66 in a separate flight for a 204.

Lascuña cashed in on Mondilla’s early meltdown with a fiery 33 to move within two but the multi-titled campaigner slowed down with a one bogey-one birdie card at the back for a 69 and a 206, four strokes behind.