Tsitsipas back from brink as French Open clouded by Wimbledon row 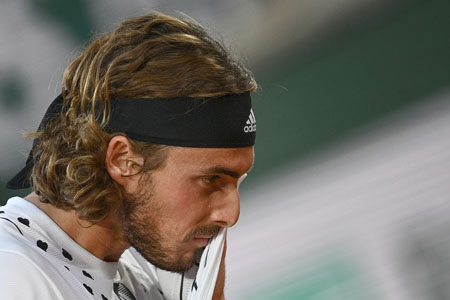 Greece's Stefanos Tsitsipas reacts as he plays against Italy's Lorenzo Musetti during their men's singles match on day three of the Roland-Garrot Open tennis tournament at the Court Philippe-Chatrier in Paris on May 24, 2022. (Photo by Christophe ARCHAMBAULT / AFP)

PARIS (AFP) – Stefanos Tsitsipas came back from the brink to reach the French Open second round as Roland Garros was again overshadowed by the crisis engulfing Wimbledon.

Greek star Tsitsipas triumphed as 20-year-old Musetti collapsed from the brink of a famous Paris win for the second year in succession.

Twelve months ago, the Italian took the first two sets against Novak Djokovic in the last 16 before injury forced a final set retirement.

He enjoyed a flying start when the night session first round tie started Tuesday, sweeping through the first two sets, out-hitting Tsitsipas just as he had done against Djokovic.

But then came the familiar power failure and Tsitsipas comfortably pocketed the next two sets.

Tsitsipas came into the tournament on the back of a successful defence of his Monte Carlo title and a runners-up spot in Madrid.

World number two Daniil Medvedev also eased into the second round but could not escape the shadow of Wimbledon, the Grand Slam tournament where he has been declared persona non grata.

“I love Roland Garros, especially since last year,” said Medvedev, who had lost in the opening round on his first four trips before reaching the quarter-finals in 2021. “I hope this year I can go further.”

One place he will not be going, however, is the All England Club next month after Wimbledon banned all Russian and Belarusian players in response to the invasion of Ukraine.

The ATP and WTA responded by stripping the sport’s most prestigious tournament of ranking points.

One day after former world number one Naomi Osaka revealed she was “leaning towards not playing” Wimbledon while defending champion Novak Djokovic said he will play despite losing 2,000 points, the controversy showed no signs of abating.

Claiming that “99%” of players want a Wimbledon with points, he added: “I’m sorry for Russia and Russians, but they are the ones causing all the trouble.”

Denis Shapovalov, a Wimbledon semi-finalist in 2021, said he objected both to the ban and the decision to strip the points.

The biggest loser on the women’s side will be Karolina Pliskova who will drop the 1,000 points by finishing runner-up to the now retired Ashleigh Barty in 2021.

She too wants 50% of the points to be retained. She intends to return to the All England Club.

“If you love the game you’re still going to go and play,” said 2017 Paris semi-finalist Pliskova after making the second round by beating Tessah Andrianjafitrimo 2-6, 6-3, 6-1.

Meanwhile, Jo-Wilfried Tsonga, a former Australian Open runner-up and world number five, bid an emotional goodbye to tennis after losing in the first round to Casper Ruud.

Spanish third seed Paula Badosa, a quarter-finalist last year, swept into the second round with a 6-2, 6-0 victory over French wildcard Fiona Ferro while 2018 champion.