Tabuena off to fiery start at Splendido Taal; Avaricio up by 1 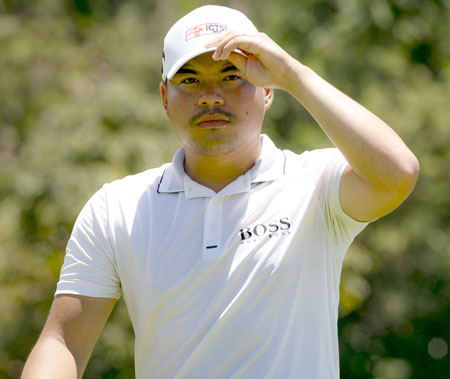 LAUREL, Batangas – Miguel Tabuena fired a six-under 66 and took a one-shot lead over  Clyde Mondilla at the start of the ICTSI Splendido Taal Championship here yesterday.

Mondilla, in an earlier flight, took command majority of the way with a seven-under card after 14 holes before settling for a 67 on a couple of late mishaps at Splendido Taal Golf Club as the field played preferred lies due to wet course following days of rain.

Tabuena, who beat Mondilla on the second playoff hole to claim the ICTSI Luisita crown last March, also made a run of four birdies in a five-hole stretch from No. 7 but reeled back with a wet bogey on the 13th before closing out with a blistering run of birdies for a 34-32 that put him on a very familiar place.

Mondilla, who marked his runner-up finishes at Luisita and Caliraya with final round rallies, had set his title drive in motion in the P2 million event with a fiery start but lost his momentum at the finish, bogeying Nos. 15 and 18 for a 33-34.

A slew of fancied bets kept the duo within sight, including Dutch Guido Van der Valk, who bucked an opening-hole bogey with five birdies in the next 14 on his way to a 68.

Meantime, Chanelle Avaricio turned in a solid two-under 70 for a one-shot lead over Sunshine Baraquiel and amateur Mafy Singson in the distaff side.

Putting premium on driving and ball control on the softened layout, the Hallow Ridge and Caliraya legs winner snapped a par-game with a birdie on No. 7 then hit two solid shots on the closing par-4 hole and drilled in a six-footer to complete a pair of 35s.

Baraquiel also had a tough time wrestling with her putter, ending up with 36 putts for a four-birdie against one double bogey and a bogey card and a 38-33.

Singson, member of the team that snatched the bronze in the just-concluded SEA Games in Vietnam, was all poised for a strong start after hitting a solid drive on the par-5 second hole then hacking her second shot from 190 yards to within five feet for eagle.

But the many-time low amateur winner went on an up-and-down round the rest of the way, draining four birdies but fumbling with three bogeys and a double bogey on the par-3 No. 9.

Chihiro Ikeda blew a frontside 35 with four bogeys in the last six holes as she slipped to joint sixth with Florence Bisera and Apple Fudolin at 75, four strokes off Avaricio.

PH SEAG finish nothing to be ashamed of – Ramirez