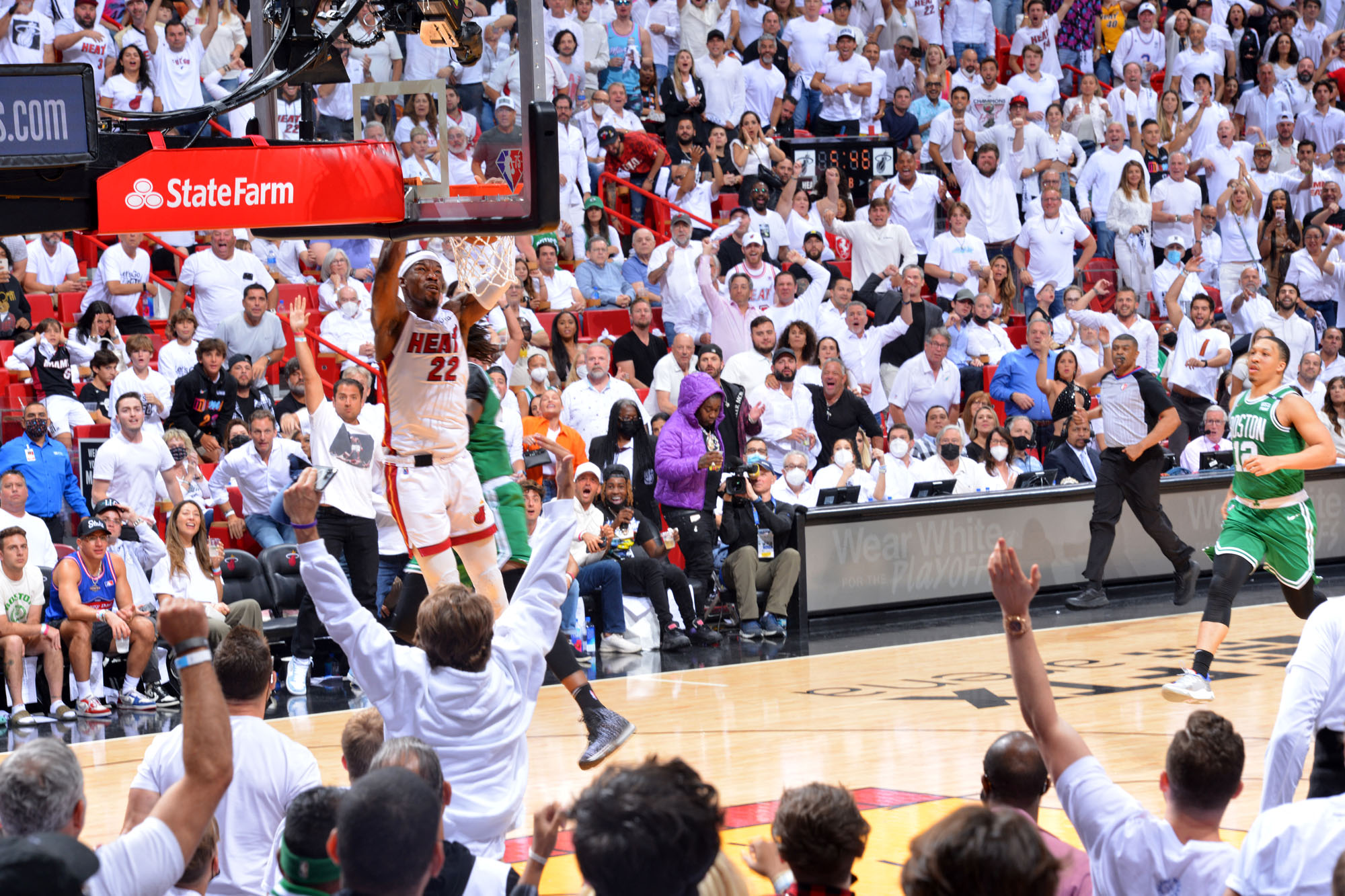 Jimmy Butler of the Miami Heat dunks during their Game 1 with the Boston Celtics. (AFP)

Butler led a revitalized Miami second-half display as the Heat transformed an eight-point half-time deficit into a double-digit lead against a depleted Celtics side at Miami’s FTX Arena.

Trailing 62-54 at the break, Miami outscored the Celtics 39-14 in the third quarter to set up a victory that gives the Eastern Conference top seeds a 1-0 lead in the best-of-seven series.

But the win owed as much to Miami’s renewed defensive effort in the second half, with the Heat shutting down Boston’s Jayson Tatum and forcing a series of crucial turnovers and 11 blocks throughout the game.

“I barely needed to say anything. Everyone was just really disappointed at our defensive focus and effort,” added Spoelstra, praising the leadership of Butler during the third-quarter blitz.

“Jimmy just inspired everybody in that third quarter,” Spoelstra said.

“Every time and pocket in the game when we needed control, or to get the right shot, or make the right decision, Jimmy had his fingerprints on it.”

Butler said Miami had decided to go back to basics in the second half.

“Keep the game easy, simple, learn to capitalize off their mistakes,” Butler said. “That’s what changed in the second half. I didn’t change anything. I continued to play basketball the right way. Shoot the ball when I’m open, hit the open guy.”

The Celtics shrugged off the injury absence of Marcus Smart and Al Horford (Covid-19 protocol) to look the sharper side in the first half, taking a 10-4 lead in the opening minutes.

Miami were initially unable to cope with the movement of Tatum, who bagged a career-high 21 points in the opening two quarters, shooting nine-of-14 from the field.

Boston led by as much as 13 at one stage in the second quarter before Miami trimmed the deficit to eight points at the interval.

Robert Williams, starting in place of Horford, also delivered a big first-half performance with 5-of-5 shooting for 12 points as well as two crucial blocks to deny Miami.

But it was a different story after the break as Miami out-hustled the Celtics defensively while raining down a deluge of buckets.

An incredible 22-2 run changed the complexion of the game and powered Miami into a 12-point lead at 76-64.

A nine-point Boston run cut the Miami lead to three points at 76-73, but the Heat rediscovered their scoring momentum and pulled away once more.