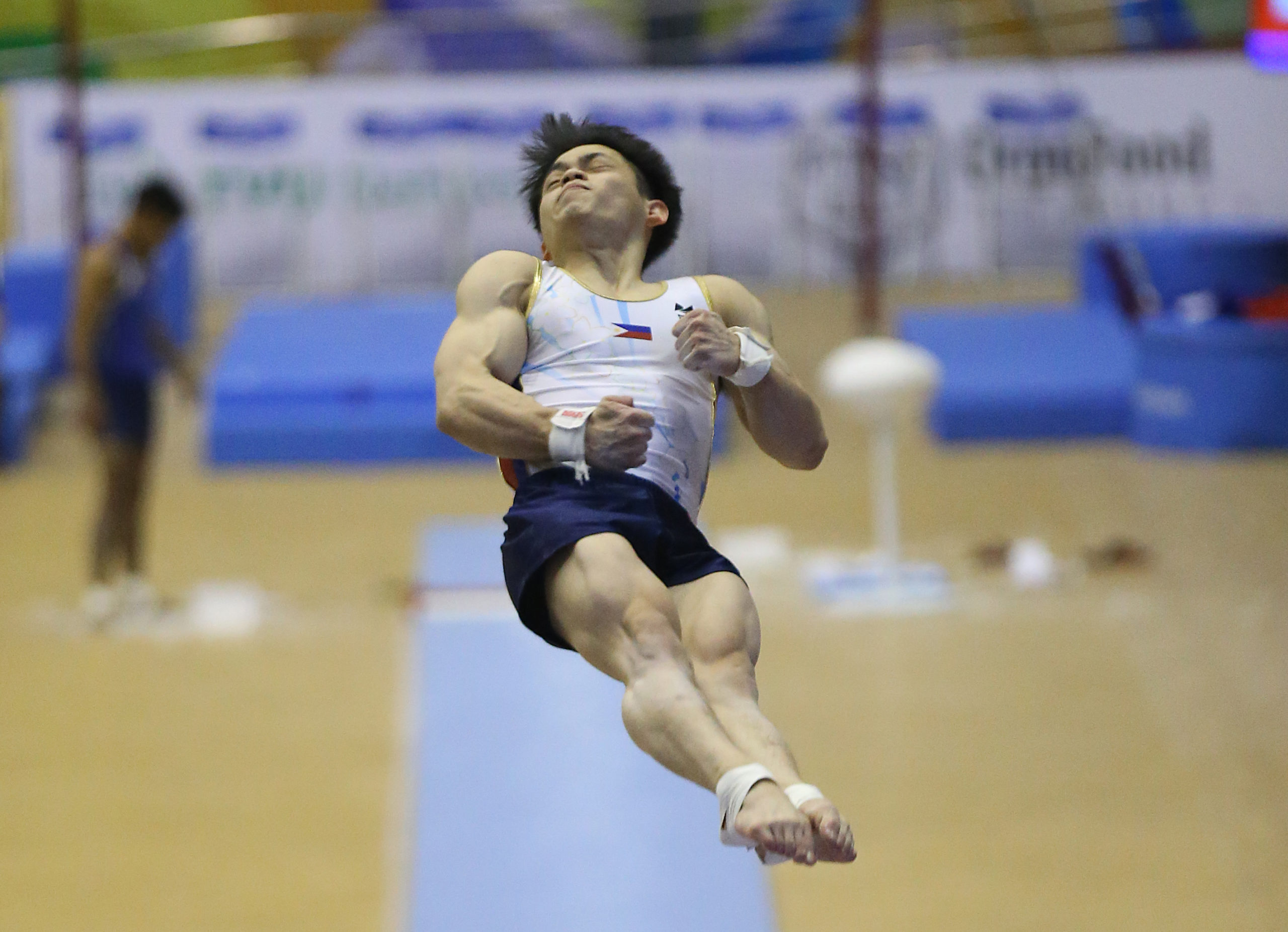 Already proud a owner of three golds, Yulo, 22, put on another display of grit and power to add the vault – an event where he is the reigning world champion – and horizontal bar golds to his collections.

The Tokyo Olympian scored 14.700 on two performances in vault and 13.867 in horizontal bar to share the gold medal with Dinh Phuong Thanh.

Yulo’s other gold medals came from the individual all-around Friday, and the floor exercise and rings on Sunday.

Yulo could have made it six golds in total but only managed a silver in parallel bars with 14.900. Still, it was more than enough to eclipse his two-gold haul in 2019.

He matched the five-gold haul recorded by a forgotten sports hero, Rolando Albuera, who achieved the feat in the Jakarta 1979 SEA Games where the Philippines collected a total of 24 gold medals and finished fourth overall

Overall, artistic gymnastics contributed 7 gold medals, 4 silvers and one bronze to the Philippine drive here, the best finish by Pinoy gymnasts in memory.

The other two gold medals were contributed by Fil-Am Aleah Finnegan in the women’s team and vault while adding a silver medal in the balance beam, losing to Malaysia’s Rachel Yeoh Li Wen (12.567-12.467).

At the Ha Noi Royal City, Tan struck the gold in men’s individual bowling with a 1292 pinfalls to end the team’s gold medal drought.

The last time the country went home with the gold was at the 2011 edition in Indonesia courtesy of Frederick Ong in the same event.

Tan beat fancied rivals Ryan Yannaphon Larpapharat of Thailand and Leonard Lalisang of Indonesia, who tallied 1286 and 1221 for silver and bronze, respectively.

Bautista clocked 13.78 seconds to reset the five-year-old national mark of 13.91 made by Patrick Unso at the 2017 Thailand Open.

Reyes, who got a big applause from the Vietnamese crowd, prevailed over his Thai rival despite having to climb back from a 39-24 deficit.

In women’s basketball, Gilas Pilipinas dictated the second half to clobber Indonesia, 93-77, at the start of its title-retention campaign.

Afril Bernardino paced with 16 points, nine rebounds and four steals as the Filipina dribblers pulled away from a 40-38 halftime lead for good.

They take on old rival Thailand on Wednesday in a key battle between two teams that finished 1-2 in the previous edition.

The national men’s volleyball team, meanwhile, bowed out of the competition after absorbing its second straight loss, this time, against Thailand, 20-25, 27-29, 22-25.

In fencing, the men’s team sabre of Christian Concepcion, Sandro Antonio Sia, Danielle Villanueva and John Dayro was only good for the bronze after losing to Thailand, 45-29.

Not to be outdone Sunday night, William Morrison led the national athletics team’s medal quest after retaining the men’s shot put gold medal at the My Dinh Sports Stadium.

Morrison successfully defended his title by heaving 18.14 meters to dominate the field that include Thailand’s Jakkapat Noisri, who took home the silver with 17.32m, and Malaysia’s Muhammad Ziyad Bind Zolkefli, who bagged the bronze with 17.20m.

Still eager to cop more medals, Ubas returned an hour later and grabbed the decathlon bronze with 6977 points.  Former champion Aries Toledo could only score 7469 and slipped to second – his three-peat bid vanished into thin air.

Gilas off to slow start, but averts embarrassing defeat to Thais