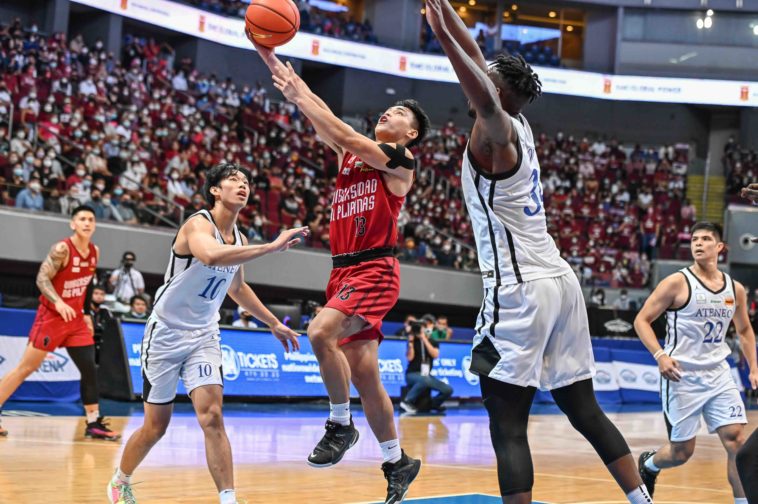 Joel Cagulangan of UP drives against Ateneo defenders

JD Cagulangan hit a booming three with 0.5 seconds left to end University of the Philippines’ 36-year title drought and deny Ateneo of its four-peat pursuit.
Cagulangan made the biggest shot of his career — at least in the collegiate scene — to lift the Fighting Maroons to 72-69 overtime win in the sudden death of the UAAP Season 84 men’s basketball Finals before thousands of wildly-cheering supporters at the Mall of Asia Arena in Pasay City Friday night.
Cagulangan and Malick Diouf, Season 84 Finals Most Valuable Player, connived down the stretch which enabled the Maroons to capture their first title since 1986 when UP was then led by the likes of Benjie Paras, Ronnie Magsanoc, and Eric Altamirano.
“I feel very happy right now,” said UP head coach Goldwin Monteverde as the Maroons also doused the efforts of SJ Belangel, who posted 27 points on a 10-of-17 shooting along with four assists, and three assists. “I want to thank the UP community. I also want to thank the Lord God for this championship.”

Former coach and now team’s basketball operations chief Bo Perasol was emotional as he celebrated with UP players – most of them he handpicked, nurtured and toughened for this kind of war.
Diouf topscored for UP with 17 points on top of nine rebounds and three steals, CJ Cansino, who shot a key triple that forced an overtime, finished with 14 points built on four three-pointers, and Cagulangan, who made up for his dismal 4-of-12 shooting and three turnovers, turned the tides for the Maroons with 13 points, five rebounds, and four assists.
Down by two points only in overtime, 69-67, it was also Cagulangan, former NCAA Juniors MVP, who orchestrated an instrumental play that enabled the Maroons to reach a 69-deadlock.
Off an isolation play, Cagulangan took his sweet time before finding Diouf cutting through the baseline for a dunk that elicited roars from the crowd.
The 21-year-old Butuan native definitely made the difference after hitting another shot from beyond the arc and scoring off a steal from off a Belangel turnover to answer Gian Mamuyac’s corner triple earlier in the extended five minutes.
Before the end of the regulation, it only took one three-point shot from Cansino to reverse UP’s fate despite trailing three points with 56.7 seconds left.
Ateneo unloaded a 9-0 run to cap by Belangel’s pair of free throws to turn a six-point deficit into a 59-56 cushion.
Cansino, who was already fiery from the three-point arc, took a difficult shot at the top of the key and drained the basket off the glass for a 59-all equalizer with 47.8.
The ensuing play turned out to be another rollercoaster ride when Gerry Abadiano misfired a triple while Belangel zoomed coast-to-coast but his layup missed.
Season 84 Most Valuable Player Ange Kouame chalked up 12 points, 14 rebounds, four assists, and one steal while Mamuyac chipped in 10 points, six rebounds, and three assists. 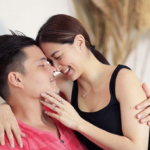