For the first time in 36 years, the University of the Philippines Fighting Maroons are the new kings of the UAAP men’s basketball.
UP finally reached the end of the long and winding road, and eventually overcame the adversities to re-produce magical feat of 1986 – largely credited to the stellar showings of Benjie Paras, Ronnie Magsanoc, and Eric Altamirano and the coaching genius of Joe Lipa.
Season 81 was the closest the Maroons can get after barging into the Finals for the first time in 32 years with the famous “Atin ‘to!” mentality of former team captain Paul Desiderio.

It was 36 years in the making but the long wait is definitely worth it as the Maroons dethroned the Eagles, 72-69, and denied them of their four-peat pursuit behind the heroics of former NCAA Juniors Most Valuable Player JD Cagulangan in Game 3 of the UAAP men’s basketball Finals on May 13, interestingly a Friday the 13th.
“Sobrang tuwa ko sa panalo. First kasi ‘yong papaano kami nanalo kanina,” said coach Goldwin Monteverde, who continued his own three-peat campaign in the senior level after steering the National University Bullpups to back-to-back titles in Seasons 81 and 82. “Again, we were down, parang kung titignan ‘yong game, parang papunta na sa Ateneo. But hindi pa rin nag-give up ‘yong team. There were times kanina during the game na they were up by five but the team managed to regroup again. Talk it out kung ano man napag-usapan in huddle, na-execute naman.”
Leading the Maroons to a historic championship is Monteverde’s way of repaying the trust the UP community gave to him for accepting the challenge to lead the team back to the zenith of success.

Former coach and now program director Bo Perasol, for his part, tipped his hat to Monteverde for sharing his wits and staying patient and the players for their unwavering will and firm resolve to become this year’s champion.
The Maroons finished the elimination round at second-seed with a 12-2 record and only lost at the hands of Ateneo and Adamson. Despite the twice-to-beat advantage, it wasn’t a walk in the park for UP as it survived La Salle in the semifinals series before the Finals clash with Ateneo.
“I know coach Gold is one with me when we say that we give glory to God for this victory, for this championship,” said Perasol, who finally savored a UAAP title not as a coach but as a program director.

“Laging sinasabi ng tao na pag-deciding game it’s all about heart or it’s all about the games of the players. But I would like to add the brilliance of coach Gold into that. Hindi lamang ‘yong fight ng mga players ang nangyari sa championship na ‘to kung hindi ‘yong composure at tsaka ‘yong wisdom ni coach Gold in leading his team, in leading our team.
“He (Monteverde) did not give up. He was a picture of calmness. ‘Yon ang nakita ng mga players and they just followed him. ‘Yon lang naman ang importante. Saying that, to end this 36-year championship drought is really sweet,” said Perasol.
To say that the win was because of a total team effort is actually an understatement. After all, Cagulangan isn’t the only one who carried the team to the victory.
The 21-year-old Butuan native may have fired the game-winning three with 0.5 seconds left but CJ Cansino, who also drained a clutch triple from the top of the key with 47.8 left in regulation, was there to force the overtime, and Malick Diouf gave enough reason to prove why he was eventually hailed as the Finals Most Valuable Player. 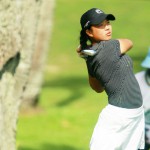