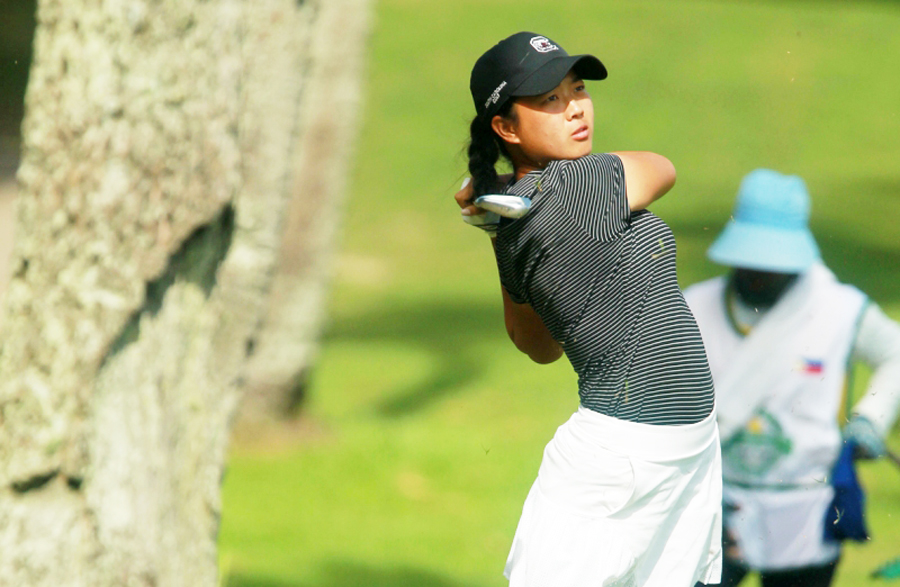 Lois Kaye Go rebounded with a three-under 69 while Mafy Singson bounced back with a 70 as the Filipina aces closed in for at least a bronze medal finish in the individual competitions in women’s golf of the 31st SEA Games in Vinh Phuc, Vietnam yesterday.

Go, member of the PH team that swept the gold medals in the 2019 edition of the regional biennial meet at Luisita in Tarlac, finally found her rhythm and touch and tamed the par-72 Heron Lake golf course where she, Singson and Rianne Malixi struggled with identical 76s Friday.

With a 145 aggregate, the Cebuana shotmaker remained too far behind leader Thai Natthakritta Vongtaveelap, who sustained her fierce form and fired a second straight 67 to all but wrap up the coveted gold heading to the final round of the 54-hole competition.

But while the Pinays gained some grounds, their counterparts virtually bowed out of the medal hunt as Jet Hernandez settled for an even par 72 after a 74 for a 146, Gab Manotoc carded a 75 for a 149 and Jed Dy faltered with a 76 for a 150.

Vongtaveelap, a three-time Thai LPGA Tour winner, assembled a whopping 10-under 134 to pull away by seven over compatriot Eila Galitsky, who stumbled with a 74 after a 67 for a 141.

Malaysia’s Jeneath Wong turned in a second straight 71 for third at 142 but a slew of others stood two, three or four strokes behind, including Go and Singson, to set the stage for a spirited chase for the bronze.

Singapore’s Aloisa Mabutas and Inez Ng pooled similar 144s after a 70 and 73 with Go a shot farther back at 145 and Singson, whose campaign with Malixi is supported by ICTSI, moving to seventh at 146.

Malixi barely improved with a 74 for a 150, eight strokes behind the third-running Wong but the 15-year-old winner of two pro tournaments back home is expected to unleash a strong finishing kick to at least gain some momentum for the team competitions which get going tomorrow.

Kristoffer Arevalo, who recently won the national stroke play championship, continued to struggle, ending up with a 79 for a 157.

Thailand poised itself for a sweep of the two individual golds as Asit Areephan scorched the course with a six-under 66 after a 72 to storm past compatriot Weerawish Narkprachar with a 138 total for a two-shot lead with one round left in men’s play.

Impressive with a 68 Friday, Narkprachar slowed down with a 72 as he slipped to joint second at 140 with Malaysia’s Ervin Chang, who fired a 67, enabling a host of others to join the medal race. Local bet Minh Nguyen Anh shot a 70 for a 141 in a tie with Indonesia’s Amadeus Susanto, who carded a 71, while Ratchanon Chantananuwat put in a second 71 and stayed within striking distance for the gold at 142.

Ryan Ang and Hiroshi Tai, both of Singapore, totalled 143s after a 72 and 74, respectively, in a tie with Thai Pongsapak Laopakdee, who stumbled with a 73, while Nateeshvar Ganesh of Malaysia shot a 70 for a 144.