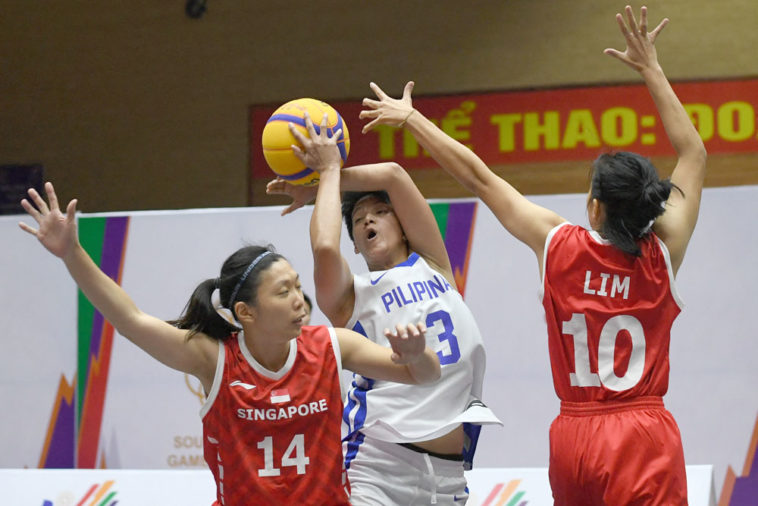 Philippines' Afril Bernardino (C) attempts to throw the ball during the women's 3x3 basketball game against Singapore during the 31st Southeast Asian Games (SEA Games) in Hanoi on May 14, 2022. (Photo by TANG CHHIN SOTHY / AFP)

Gilas Pilipinas secured spots in the semifinals of both the men’s and women’s 3×3 basketball despite another challenging day in the 31st Southeast Asian Games Saturday in Hanoi, Vietnam.

The men’s team composed of Brandon Rosser, Jorey Napoles, Marvin Hayes and Reymar Caduyac defeated Singapore and Malaysia but bowed to host Vietnam to finish second at the end of the eliminations of the men’s side with a 4-2 record.

Afril Bernardino, Janine Pontejos, Clare Castro and Angel Surada secured the fourth and final semis berth in the distaff event after winning two of the final three games for an even 3-3 record.

Rosser, Napoles, Hayes and Caduyac are scheduled to face Thailand in the semis being played at presstime at the Thanh Tri Gymnasium, with the winner advancing to play either Vietnam or Indonesia.

The team of Bernardino, Pontejos, Castro and Surada, on the other hand, will have their hands full against Thailand in the women’s semis, which was also held at presstime.

Gilas men’s defeated Singapore, 21-16, before taking down Malaysia, 20-14, to assure itself of a spot in the semis.

But Gilas lost 21-14 against a Vietnamese squad buoyed by its hometown fans along with a strong performance from Chris Dierker.

The Gilas ladies beat Singapore, 20-14, but suffered defeat at the hands of Indonesia, 21-12, before bouncing back to defeat Malaysia in a closely-fought encounter, 13-11. 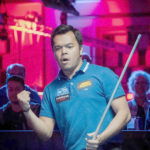