Bianca 3 shots off leader after 66 at Cognizant Founders Cup 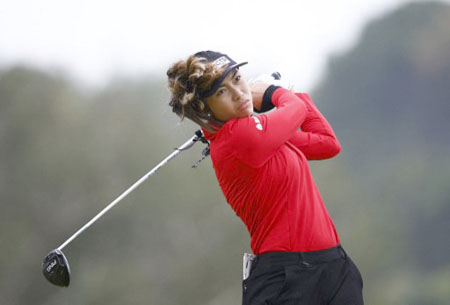 Bianca Pagdanganan fired an eagle-spiked six-under-par 66 while Dottie Ardina and Yuka Saso hobbled with similar 73s at the start of the Cognizant Founders Cup in Clifton, New Jersey Thursday (Friday in Manila).

The 24-year-old Tokyo Olympian could have produced two eagles if not for a sorry miss on the 9th.

Still, it was a fabulous round for Pagdanganan who came into the tournament fully motivated after finishing in joint third in the US Women’s Open qualifier in Fort Myers, Florida.

What she failed to achieve on the 9th though – she had four birdies in the first 9 holes – she did on the 12th with aplomb, then he went seven under for the day after another birdie on the 15th before stumbling with a lone bogey on the 16th to trail solo leader Madelene Sagstrom by three strokes at fourth place.

Sagstrom scattered 9 birdies to take a one-stroke lead over American Megan Khang while at third is Japan’s Nasa Hataoka, who shot a bogey-free 65.

She said her strategy during the first round was “knowing where to miss.”

Pagdanganan, indeed, hardly missed after hitting 10 of 14 fairways and 16 of 18 greens.

Pagdanganan told LPGA.com, adding that the US Open qualifier was “a bit of a kickstart”.

In contrast, Ardina and Saso struggled, finding themselves in the crowded 92nd place.