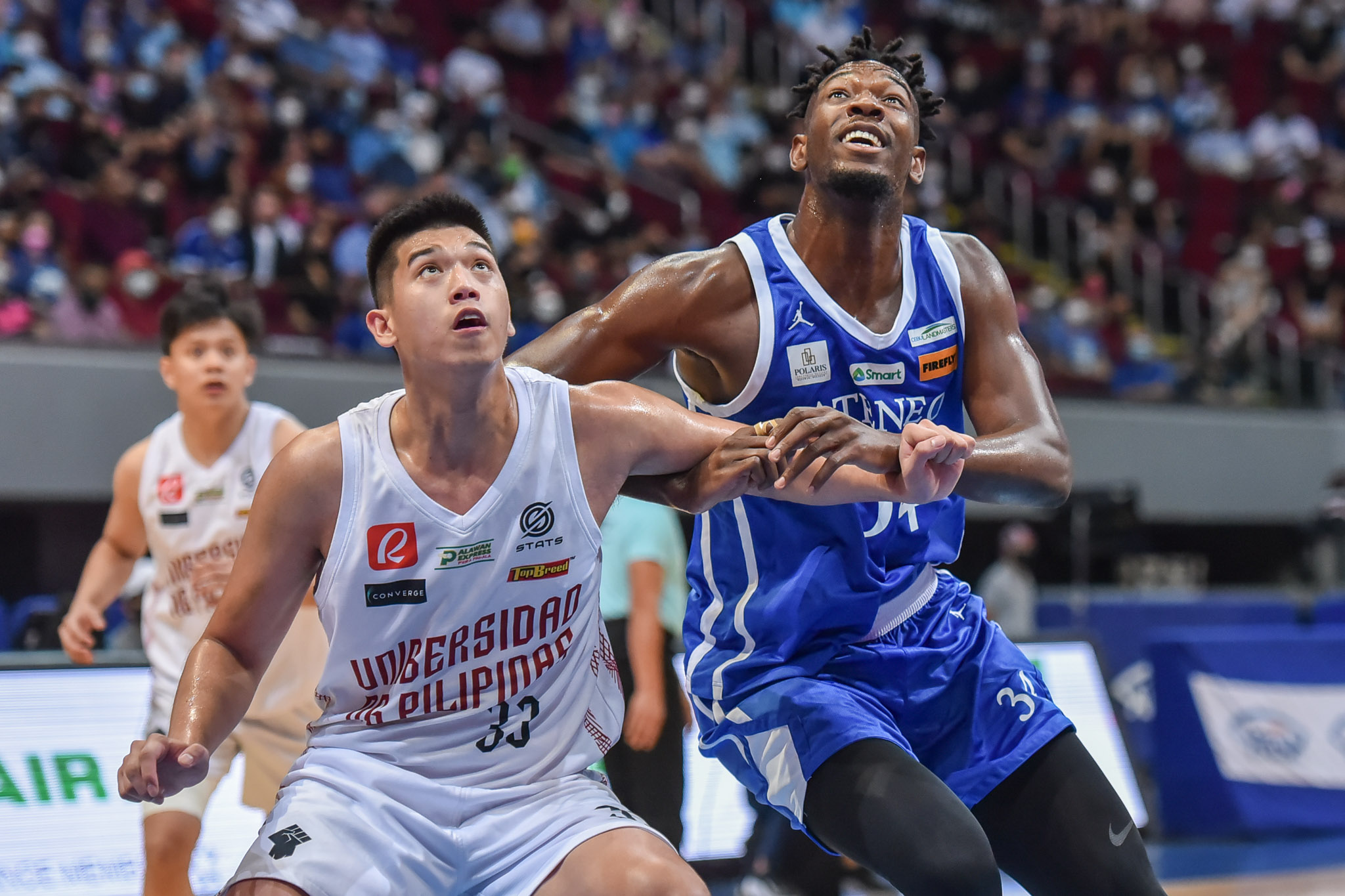 Reigning champion Ateneo rediscovered its deadly form and held off University of the Philippines, 69-66, in Game 2 to force a winner-take-all in the UAAP Finals Wednesday at the Mall of Asia Arena in Pasay City.
Ange Kouame showed why he is the season’s Most Valuable Player after leading the Blue Eagles in front of a strong 13,521 crowd.
Tyler Tio and Dave Ildefonso, who struggled in Game 1, came alive this time and helped Kouame provide for Ateneo’s offensive run.
Kouame tallied 14 points and 14 rebounds and had eight blocks, mostly coming from the crucial payoff period, while Tio added 14 points.
Ildefonso did it all on the floor and chalked up 10 points, eight rebounds, and four assists for the Eagles, who will play in a rubber match against the Fighting Maroons on Friday to pursue their four-peat campaign.
Eagles head coach Tab Baldwin could not help but compare this series against UP with the way Ateneo fought La Salle in Season 80 in 2017.
It was the same rollercoaster ride for Baldwin and Ateneo as they won first in Game 1 before yielding in Game 2.
But the Eagles had the last laugh and eventually won the title to begin its historic three-peat campaign until Season 82.
“I was just sitting here thinking that this Finals series feels like that La Salle series,” said Baldwin. “It doesn’t feel like college basketball, it feels like something more’s at stake. I think UP brins a really, really high-quality basketball to this series.
“And tonight, we responded and we did the job in the key statistical category apart from our free throw shooting. Everything selse on the stat sheet looks pretty good for us,” added the three-time UAAP champion coach as the Eagles had an 11-of-16 from the free throw line with a couple of key shots down the stretch from Kouame and Ildefonso.
Carl Tamayo, this season’s Rookie of the Year, spearheaded UP with 18 points and 12 rebounds while Ricci Rivero, who made a costly turnover down the stretch, chipped in 16 points, four rebounds, and four steals.
Tied at 61-all after Kouame split his free throw, the Season 82 MVP and SJ Belangel connived for four straight points to retake momentum with only 2:03 left in the fourth quarter.
Zavier Lucero drained a pair of free throws in the ensuing play to put the match within striking distance, 65-63, before Ildefonso and Kouame once again split their free throws with 1:04 remaining.
The crucial minute all boiled down to defense as Gian Mamuyac secured a crucial steal off an inbound and zoomed to the basket for an easy conversion to create a six-point lead, 69-63, at the 48.9-second mark.
Rivero was able to respond quickly with a layup before Belangel missed from beyond the arc in the next play.
The UP veteran, however, seemed to be unaware of the waning seconds and that the Maroons were trailing by four points ‒ a two-ball possession.
Rivero took too long to cross the ball in center court and attempted a late drive to draw a foul with 2.0 ticks to go.
Time, obviously, isn’t on UP’s side as the 23-year-old Rivero intentionally missed his second attempt but Ildefonso made sure not to give up the ball and grabbed an offensive rebound.