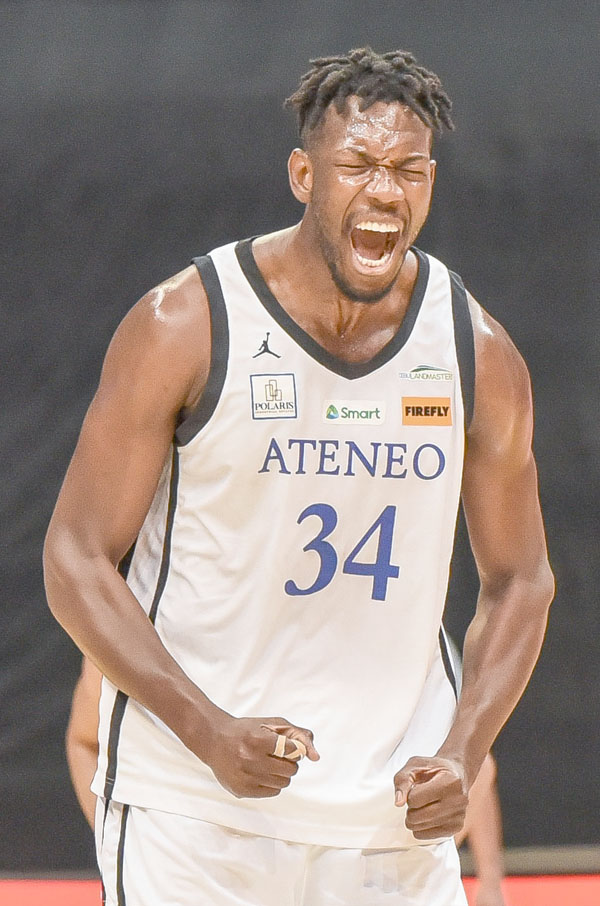 Ange Kouame of Ateneo bagged his first Most Valuable Player (MVP)  plum while University of the Philippines forward Carl Tamayo was hailed Rookie of the Year in the UAAP Season 84 men’s basketball tournament.
Kouame pulled away with 69.214 statistical points while Tamayo tallied 57.643 SPs in 14 games.
The 6-foot-11 naturalized Filipino, who hails from Ivory Coast in West Africa, averaged 12.86 points, 11.0 rebounds, and 1.71 assists in 14 games.
Tamayo, for his part, posted norms of 13.14 points, 7.29 rebounds, and 1.36 assists also in 14 outings.
Both Kouame and Tamayo were also part of the Mythical Team, completed by the likes of Justine Baltazar of De La Salle (63.0), Zavier Lucero of UP (62.0), and Michael Phillips also of De La Salle (54.643).
The league, which is set to hold an awarding ceremony during Game 2 of the UAAP Finals being at press time, veered away from the traditional format and had a “positionless” Mythical Team.
This paved the way for Kouame, Baltazar, Lucero, Tamayo, and Phillips, who all play the frontcourt positions, to complete the Mythical Team.
Maodo Diouf (56.929) of UP actually has higher SPs than Phillips but he is considered as a foreign student-athlete. Diouf hails from Cameroon.
The same goes for Emmanuel Ojuola of Far Eastern University (54.643), who is tied with Phillips in terms of SPs. He is from Senegal.
Dave Ildefonso (53.286) and Jerom Lastimosa (53.071), backcourt players for Ateneo and Adamson, respectively, could have been in the Mythical Team were it not for the “positionless” format.
Ljay Gonzales of FEU is listed at No. 10 with 51.308 SPs.

Mike Tyson to face no charges over plane fracas

Mike Tyson to face no charges over plane fracas