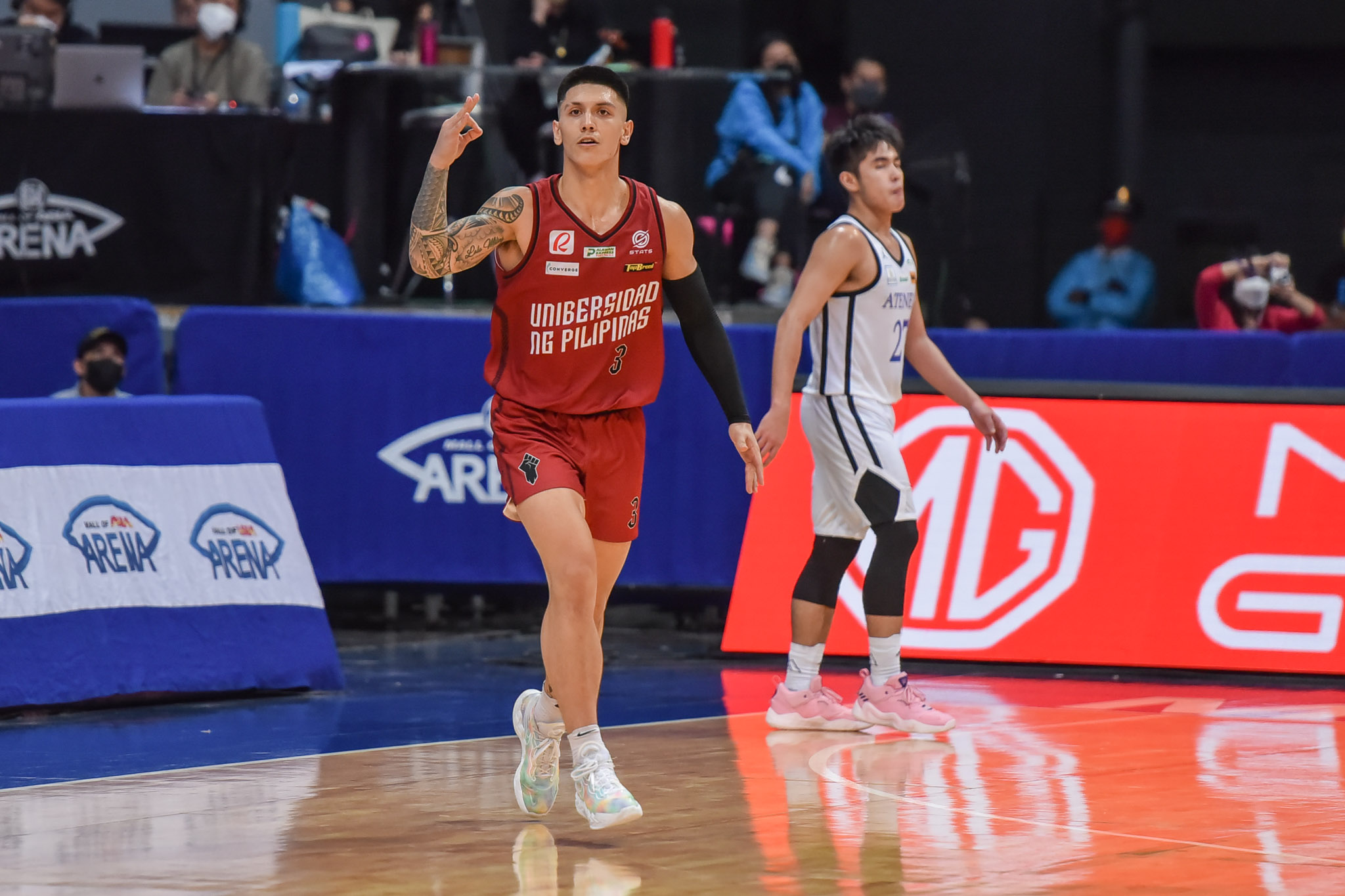 University of the Philippines showed steely resolve and completed another great comeback story against defending champion Ateneo in Game 1 of the UAAP Finals Sunday at the Mall of Asia Arena in Pasay City.

The initial offering of the title series dubbed as Battle of Katipunan produced heroes of different sizes as the Fighting Maroons willed their way to a tense-filled 81-74 overtime win before another roaring supporters.

UP’s Zavier Lucero, Carl Tamayo, and Ricci Rivero connived to hand the Blue Eagles their first back-to-back losses. The Maroons also rallied furiously from a 10-point deficit in the last four minutes to prevail during their May 1 showdown.

UP, hoping to end a 36-year championship drought, clamped down on its defense and forced Ateneo to commit three straight shotclock violations in the waning minutes which proved costly for the defending champion.
That enabled the Maroons, who erased a third quarter 11-point deficit, to seize the momentum after playing catch-up for most of the game as Lucero fired a corner triple off a JD Cagulangan assist en route to a 74-deadlock with 3:49 left.
“Maraming ups and downs nangyari on both ends… but we just kept reminding each other not to give up,” said UP coach Goldwin Monteverde. “Just continue what we’re doing, just try to be consistent sa game at gumanda, nadala namin hanggang sa dulo.”

But it was James Spencer who made the difference when he sank a game-tying three-pointer off an Ateneo inbound turnover to send the game into overtime, 70-all, with 24.7 seconds left in front of 11,582 spectators, including UP alumnus, Vice Presidentiable, and Sen. Francis “Kiko” Pangilinan.
After Eagles committed a shotclock violation with barely a second left, Rivero elicited a concerted sigh of disbelief when he nearly made a “Hail Mary” shot from
Rivero made up for his dismal 4-of-16 shooting from the field and seven turnovers with a perfect 11of-11 shooting from free throw area for 19 points. He also logged four steals.

Lucero posted 17 points and 13 rebounds, James Spencer tallied 13 points built on three triples, Malick Diouf grabbed 10 points, 15 rebounds, four assists, and three steals, and Carl Tamayo also had an overall performance with 10 points, nine rebounds, five steals, and three assists.
Tied at 74-all, Rivero completed an and-one play before Tamayo converted another basket off the former’s steal from Ateneo’s inbound with 1:58 remaining.
A Rivero block on Ange Kouame at the 45-second mark also came in time for the Maroons as the Eagles just couldn’t find their scoring groove at the endgame.
Gian Mamuyac, who went 0-of-5 from beyond the arc, missed three straight triples in the last minute while Verano misfired from the free throw line with 8.2 ticks left.

Kouame’s efforts went for naught despite leading the Eagles with 18 points, 11 rebounds, four assists, and four blocks.
SJ Belangel scored 17 points powered by four treys along with four rebounds, and three assists, but he lost steam in the crunch.