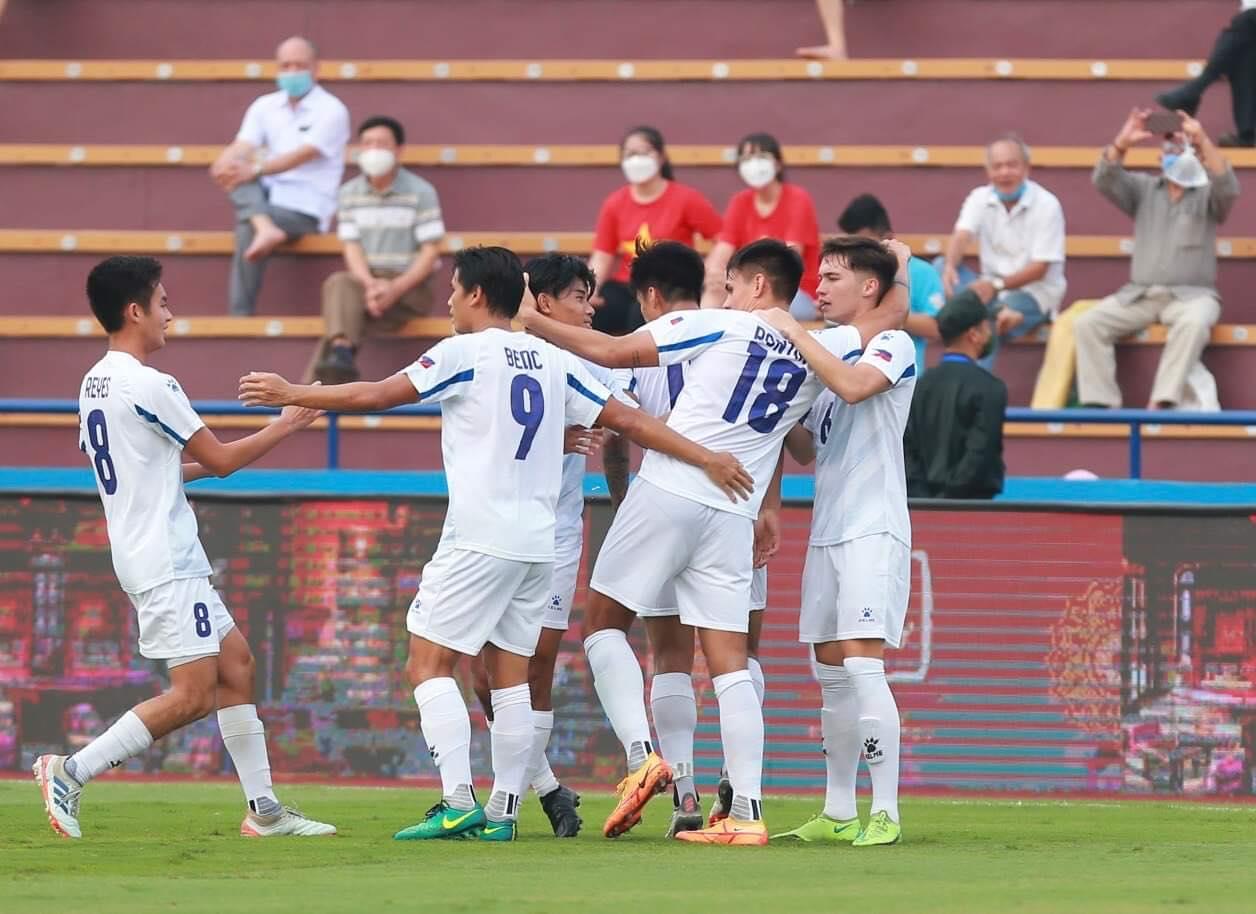 The Azkals U-23 celebrate their dominant performance against Timor Leste, 4-0, in Group A of the men’s football preliminary round of #SEAGames31. (Courtesy of Zing News)

A fearless attacking display powered the Philippines to a 4-0 triumph over Timor Leste at the start of men’s football at the 31st Southeast Asian Games at the Viet Tri Stadium in Phu Tho, Vietnam, on Friday.

Over at Tuan Chau Island in Quang Nihn Province, the men’s handball team also opened its campaign on a high note with an 18-16, 18-16 upset of Thailand, which clinched silver in 2019 behind Vietnam.

But the Filipino beach handball athletes, who completed the podium at home in 2019, will put their mettle to a test against the host and defending champions on Saturday.

Rontini opened the scoring with a pinpoint header off captain Stephan Schrock’s cross in the 11th minute, but it wasn’t until the second half when the under-23 Azkals finally put the Timorese to the sword.

“It’s always going to be difficult going into the tournament because we don’t know exactly where we are as a team, but everyone showed a lot of commitment and discipline,” Schrock said. “The boys did very well.”

The Filipinos have a one-day break before taking on the Vietnamese on Sunday in a match that could determine their chances of advancing to the semifinals.

“We sleep, eat and we go again,” said Schrock, expressing confidence of a strong showing against the hosts.

The Philippines almost doubled the lead in the 35th minute when Sandro Reyes released Bedic down the middle only for the Kaya FC Iloilo striker to spray his shot wide.

Except for an early chance, Timor Leste hardly had a sight on goal as the Philippines dominated proceedings at midfield.

Chung, who tested the Timorese goalkeeper twice in the first half, finally got on the scoresheet in the 56th minute thanks to another fine ball from Schrock.

Bedic made it 3-0 in the 78th minute, showing strength and skill in holding off defenders before finding the back of the net. Kekkonen netted a fourth with a powerful strike in the middle after being teed up by Oli Bias nine minutes from time.

On victory over La Salle, Tamayo thanks coach Goldwin’s ‘never give up’ attitude

Dingdong Dantes, Marian Rivera in ‘MISS U: A Journey to the Promised Land’

Dingdong Dantes, Marian Rivera in 'MISS U: A Journey to the Promised Land'