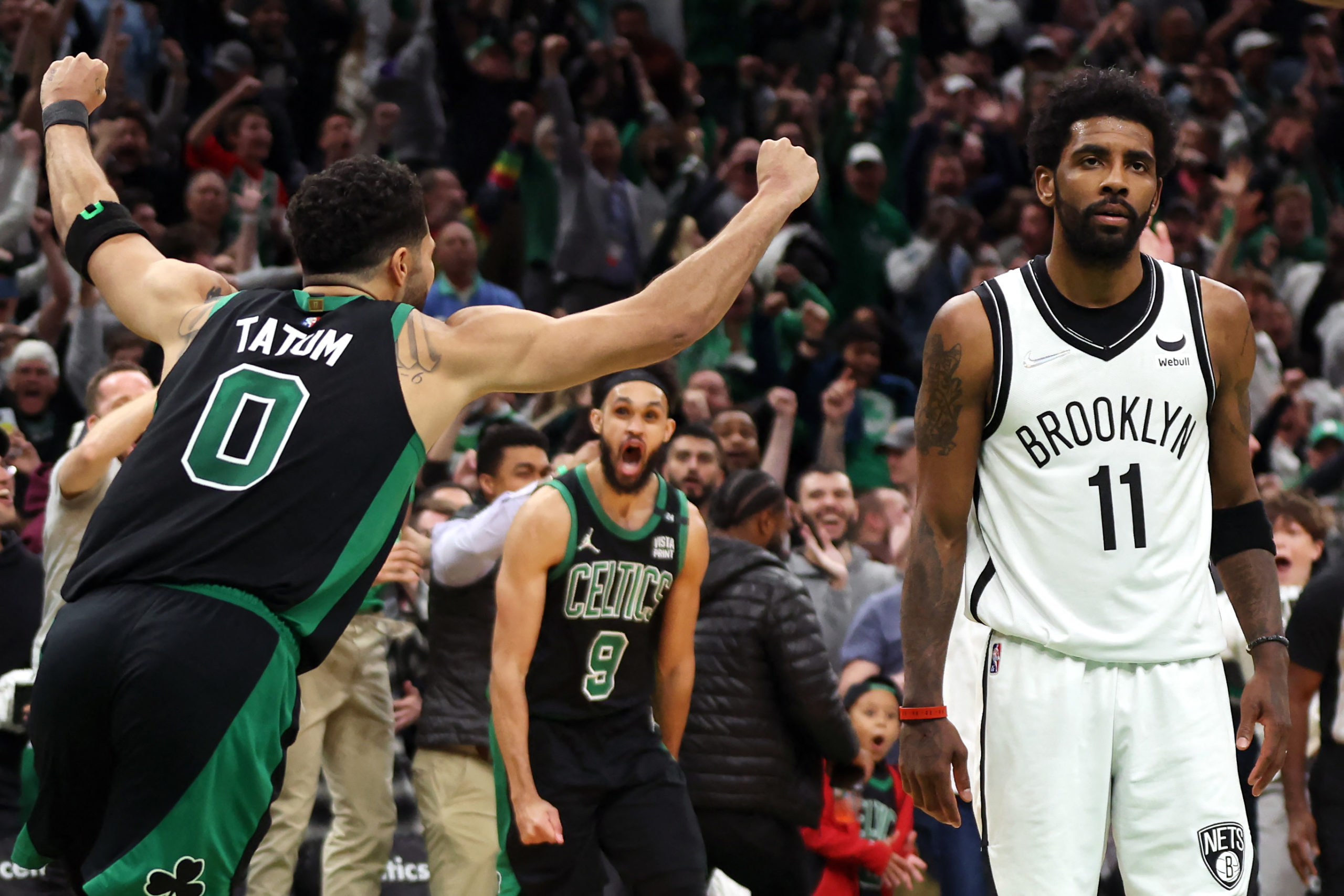 Jayson Tatum of the Boston Celtics celebrates his game winning basket as Kyrie Irving of the Brooklyn Nets looks on. (AFP)

MIAMI (AFP) – Jayson Tatum spun in for a buzzer-beating layup to give the Boston Celtics a dramatic 115-114 victory over the Brooklyn Nets on Sunday in the first game of their NBA Eastern Conference playoff series.

Tatum scored 31 points to lead the Celtics, who thwarted a fourth-quarter comeback bid by the Nets to take a 1-0 lead in the best-of-seven series.

The Bucks, led by NBA Most Valuable Player award contender Giannis Antetokounmpo, beat the Chicago Bulls, 93-86, and the Heat dominated the Atlanta Hawks, 115-91.

In Boston, Tatum added eight assists and two blocked shots, Jaylen Brown added 23 points, and Al Horford and Marcus Smart scored 20 apiece for the Celtics, who took a 96-85 lead into the fourth quarter but trailed 114-111 with less than a minute to play.

Former Celtic Kyrie Irving, booed throughout by Boston fans who still resent his departure for Brooklyn, led the Nets with 39 points. Kevin Durant was the only other Nets starter in double figures with 23.

Irving will no doubt hear from the NBA after a middle-finger salute to heckling fans in the third quarter, but he saved his best gesture for the fourth period, when he scored 18 points to key the Nets’ comeback bid.

But the Celtics clamped down defensively and pulled within one on Brown’s driving layup. After Durant missed a three-pointer, Tatum, fed by Smart from across the lane, willed his way through traffic for the game-winner.

“When he took that dribble, we just kind of made eye contact and he made a great pass and I just had to make a layup,” Tatum said of the final play.

A first half that featured 17 lead changes ended with the score knotted at 61-61, but the Celtics, who had been idle since their last regular-season game as the Nets battled through the play-in tournament, pulled away with a 39-24 third quarter.

“Our aggressiveness was great,” Celtics coach Ime Udoka said of his team’s third-quarter performance. “It was different from the first half. I felt like, offensively, we got going as well, knocked a little bit of the rust off in the first half.”

Irving was unrepentant after his response to Celtics fans but said it shouldn’t be the focus of the contest.

“It’s not about the fans,” Irving said. “The fans aren’t playing.”

Durant said the Nets could find ways to improve before game two on Wednesday.

“Obviously the last play was crucial, but there was a lot of plays that mattered,” he said. “It’s a journey, and we’re looking forward to the next game.”

In Milwaukee, Antetokounmpo scored 27 points and pulled down 16 rebounds to lead the Bucks to victory, although foul trouble kept him on the bench for much of the fourth quarter.

Montenegrin center Nikola Vucevic led the Bulls with 24 points and 17 rebounds, but missed two straight baskets in the paint in the final minute.

The Bucks led by as many as 16 points in the first half, the Bulls taking the lead for the first time with less than three minutes left in the third quarter.

Milwaukee’s Jrue Holiday drilled a go-ahead three-pointer with 5:03 remaining, and the Bulls wouldn’t get in front again.

Robinson made 9-of-10 shots, including 8-of-9 from 3-point range, while Jimmy Butler added 21 points and P.J. Tucker contributed 16 for Miami.

The Hawks and their star guard Trae Young suffered through a miserable night against Miami’s defense.