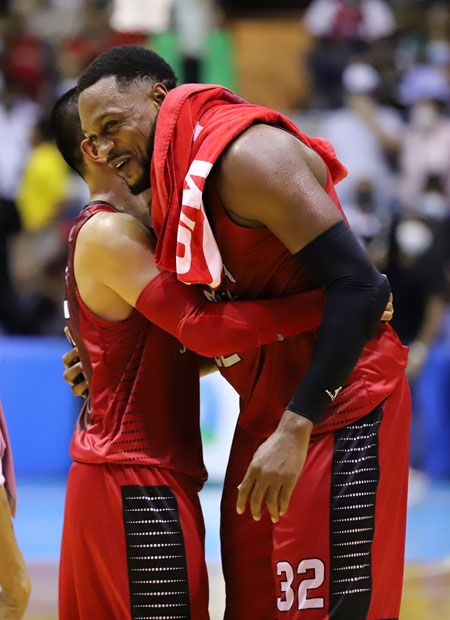 Justin Brownlee erupted for 47 points as Barangay Ginebra San Miguel booked a return trip to the PBA Governors’ Cup Finals with a massive 112-93 win over NLEX in Game 4 of their semifinal series Wednesday at the Smart Araneta Coliseum.

The resident import sizzled right from the beginning as he made 17 of 24 shots while leading a third quarter breakaway that allowed Ginebra to complete a 3-1 series win and secure a spot in the title series against Meralco or Magnolia Pambansang Manok.

“Life is a lot easier when you have Justin Brownlee,” said Cone. “What a phenomenal, phenomenal performance by Justin. I’m just amazed by it.”

It was Ginebra’s seventh finals appearance under Cone, four of which have come in the reinforced tournament with Brownlee leading the charge.

Ginebra also made its way back to the league’s grandest stage following a disappointing run in the Philippine Cup when it needed a playoff to clinch the eighth and finals quarters berth before falling short to eventual champion TNT.

This time, Ginebra overcame a four-game skid to finish sixth in the elims and beat twice-to-beat TNT in the quarters and win the first two games against NLEX.

A stunning 86-85 loss in Game 3 on two errors by LA Tenorio didn’t affect the Gin Kings’ performance before another big crowd who were delighted to see their beloved team move a step closer towards claiming a 14th championship.

Tenorio shook off his endgame miscues the last time and scored 14 points.

Import Cam Clark scored 34 points but the Road Warriors couldn’t pull off another win that would have forced a deciding fifth game.

Don Trollano had 15 points and seven rebounds while Justin Chua added 10 points and five rebounds for NLEX in its final game of the season.

Ginebra was only up 53-50 at half but Brownlee fired 11 in the third to hike its lead to double figures.

The Road Warriors tried to make a run in the fourth with a Clark basket cutting the deficit to eight, 90-82, with 7 1/2 minutes to go.

But Brownlee took charge anew with several baskets, including a long three with more than two minutes left for a 110-93 lead that rocked the Big Dome.