Fil-Japanese Yuka Saso shot a five-under 67 and tied six others for a share of fourth in the opening round of the Gainbridge LPGA Boca Rio Thursday in Florida.

Saso, who collected roughly P3.27 million in finishing 6th in the Tournament of Champions last Sunday that saw her carrying the Japanese flag for the first time, reeled off six birdies against a lone bogey to keep fast-starting Lydia Ko of New Zealand within her sight.

Bianca Pagdanganan, however, needs a big round on Friday after settling for an even-par 72.

Ko was deadly and flawless, firing a 9-under par 63 to seize a two-stroke lead over Tournament of Champions winner Danielle Kang and over Indian Aditi Ashok.

Top-ranked defending champion Nelly Korda of the United States was also in a group sharing 11th on 68. (AFP) 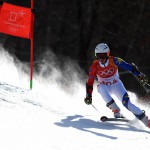