“He is a player with big shots, good serve and he has very high potential,” Nadal said of the 126th-ranked Hanfmann, who put up more of a fight than the score suggested.

Next up for Nadal is either Russian 28th seed Karen Khachanov or Frenchman Benjamin Bonzi.

Nadal, with two service breaks, took the opening set after 48 minutes with a backhand winner to the top corner.

The meticulous Spaniard kept moving Hanfmann around the court and claimed another service break with a forehand winner for 5-3 and served it out for a two-sets lead.

Another early service break had Nadal on the way in the third set but he needed five match points to close it out.

The ultra-consistent Barty, who won a warm-up tournament in Adelaide, hasn’t dropped her serve for 48 straight games over five matches this year.

Barty, who won Wimbledon last year, is potentially one win away from a last-16 showdown with defending champion Osaka, who plays American Madison Brengle in Wednesday’s night session.

But first Barty will have a much tougher task in the third round on Friday against seasoned Italian 30th seed Camila Giorgi, who beat Czech Tereza Martincova 6-2, 7-6 (7/2).

It was Badosa’s seventh match in 10 days but the Spaniard said she was holding up well. 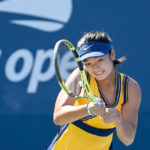