Cap: Giannis Antetokounmpo of the Milwaukee Bucks powers his way to the basket in the team’s 121-108 win over the Brooklyn Nets. (AFP)

The Bucks spread the scoring around as Antetokounmpo led six Bucks in double figure scoring, including all five starters in front of a crowd of 17,700 at the Barclays Center.

This was Antetokounmpo’s seventh straight 30-point game against the Nets.

“There is a lot of excitement in the air when you play Brooklyn,” said Antetokounmpo. “We got wide open shots. We defended and we helped one another. We played well.”

The Bucks welcomed the return of Antetokounmpo, who was a late scratch from their last game on Wednesday with a non-Covid-19 illness.

Antetokounmpo recently missed five games due to the NBA’s Covid-19 measures and is averaging 32 points and more than 10 rebounds per game in six contests since returning.

“He comes with the killer knockout blow,” Bucks acting head coach Darvin Ham said of Antetokounmpo. “Once he sees us in position, he knows what spots he wants to get to.”

The Bucks beat the Nets in seven games in the Eastern Conference semi-finals last season before going on to win the NBA championship.

On Friday, Khris Middleton scored 15 of his 20 points in the third quarter and Bobby Portis scored 20 of his 25 in the first half for Milwaukee, who ended a two-game losing skid.

The Nets lost their fourth game in the past five and have dropped five straight at home.

They were without Kyrie Irving who is only allowed to play in road games after refusing to get vaccinated against the coronavirus. Irving is not permitted to play at home because of New York City’s vaccine mandates.

In Los Angeles, LeBron James scored 32 points and Malik Morris finished with 29 as the Los Angeles Lakers beat the Atlanta Hawks 134-118 for their fourth consecutive win.

In Toronto, Fred VanVleet finished with a triple-double of 37 points, 10 rebounds and 10 assists as the Toronto Raptors clobbered the short-handed Utah Jazz 122-108.

VanVleet scored 24 points in the third quarter alone as he recorded his first career triple double.

In Chicago, Zach LaVine’s scored a game-high 27 points as the Chicago Bulls extended their winning streak to nine games with a 130-122 defeat of the Washington Wizards. It is the Bulls longest winning streak in 10 seasons. 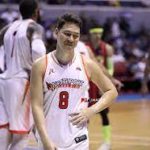