Melcah Jen Caballero won’t be around to defend her two gold medals in rowing at the Hanoi 31st Southeast Asian Games in May 2022 after she preferred to retire from the national team to focus on her career at the Philippine Navy.

“Every stroke opened different chapters of my life to which I can say that I have now reached the shore,” Caballero wrote in her resignation letter to Philippine Rowing Association President Patrick “Pato” Gregorio. “Just like the old saying goes, ‘every beginning has its end,’ I have finally reached the end of the tunnel and would like to pursue the other story of my career.”

She said the decision to retire at peak of her athletic career was a difficult decision to make.

“I concluded that now is the right time for me to focus on my naval career advancement and to take the chance to apply as a military officer,” she said. “By this, I would like to inform you [Gregorio] of my intention to retire as an athlete of the Philippine Rowing Association effective December 1, 2021.”

The PRA accepted her retirement with a heavy heart. Caballero is a cinch to repeat as gold medalists in both events in Hanoi and could be a medal potential in Huangzhou.

“If your decision is final, then I can only wish you the best in all your future endeavors,” Gregorio said.

Gregorio said Caballero’s skills and talents are well recognized and appreciated by the association.

“She is welcome to return if she changes her mind to compete for the next year’s SEA Games and Asian Games,” he said.

Philippine rowing took the Olympic spotlight after Cris Nievarez competed in men’s singles sculls last July in Tokyo where he broke his personal record that made him a potential returnee in Paris 2024. 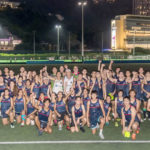