After almost two years, fans will be back on the stands starting Saturday.

The Pasay local government unit and the Games and Amusements Board have allowed the 2021 Chooks-to-Go Maharlika Pilipinas Basketball League powered by TM to hold its games at the SM Mall of Asia Arena with 50-percent audience capacity or 7,500 fans.

But for the first two days of the 13-day tournament, Chooks-to-Go, the organizers of the tournament, deemed that it would let only 1,400 fans in attendance to test the waters.

“We all know that the fans are excited to be allowed back inside the SM Mall of Asia Arena,” said Chooks-to-Go president Ronald Mascariñas. “The first two days though will be our test on how we can fully bring the fans back at the MOA Arena. If our protocols prove to be safe, we will gradually bring more fans in and, hopefully, have 7,500 fully-vaccinated fans inside the venue come the playoffs.”

The 10 teams competing on the first day will be given 100 tickets each for Saturday and Sunday.

On the other hand, 300 tickets will be given away during the first two days on a first-come, first-serve basis and only one ticket per person. The fan must present a valid identification card and proof of full vaccination.

The tickets will be distributed at the Coral Way entrance of the arena.

Opening the hostilities at 9:30 am in this league that is regulated by the Games and Amusements Board are the Iloilo United Royals and league newcomers Negros Muscovados.

At 12:00 noon, the league will hold an opening ceremony which will be graced by MPBL founder Sen. Manny Pacquiao and Mascariñas. Aicelle Santos and all-girl band Rogue will also perform in the ceremony that has “Reignite” as its theme.

All 22 teams will have a parade as well with their respective muses.

For the elimination round, IBC 13 will air one game from Mondays to Saturdays while having double-headers on Sundays. All games will air on Chooks-to-Go Pilipinas’ and Maharlika Pilipinas Basketball League Facebook pages. 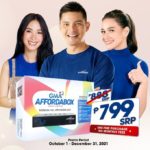