Purefoods became the latest champion of the PBA 3×3 tournament after taking down Meralco, 21-16, in the final of the fourth leg held Sunday at the Ynares Sports Arena in Pasig City.

Pao Javelona knocked down the big baskets on his way to 10 points as the TJ Titans finally made it to the top after two semifinal appearances in the previous three legs of the PBA’s halfcourt version.

Javelona, Joseph Eriobu, Jed Mendoza and Jun Bonsubre took home the top prize of P100,000 and 100 tour points at the expense of the Bolts, who were denied a chance to become the first two-time leg winner of the inaugural conference.

The TJ Titans placed second in Pool C with a 2-1 record before defeating the Pioneer Pro Tibay, 20-15, in the quarterfinals.

In the semis, Purefoods repeated over first leg champion TNT, this time with a convincing 21-11 victory.

Meralco, the Leg 2 champion which is in its third finals since the start of the competition, settled for P50,000 given to the leg runner-up, raising its total earnings to P200,000.

Tonino Gonzaga, Alfred Batino, Joseph Sedurifa and Dexter Maiquez topped Pool B with a 2-1 record and reached the semis with a 21-16 victory over the Cavitex Braves in the quarters.

The Bolts then eliminated erstwhile unbeaten Platinum Karaoke in the semis, 21-13.
Javelona sparked Purefoods to a 13-8 lead in the final before Meralco came back to make it a seesaw battle midway in the contest.

But Javelona rose to the occasion once again, breaking a 15-all tie with a two-pointer followed by a medium-range shot to give a comfortable lead.

The Tropang Giga have collected a total of P160,000 through four legs. 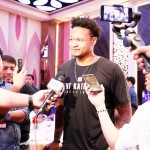