Hoyohoy erupted for 30 points on 10-of-17 shooting, including 11 in the payoff period, to go with nine rebounds to negate his seven turnovers.

And the product of Our Lady of Fatima University, who is serving as one of the Luzon-based players for the Archangels, stepped up late.

Up by just a point with less than three minutes left in the game, Hoyohoy strung up

five points on two free throws and a triple to stretch the Archangels lead to six, 88-82, with 1:14 left.

In the ensuing play, Edzel Mag-isa converted a bucket for the Explorers but Lugie Cuyos retaliated with a trey, 91-84.

Though Cuyos then split his charities to seal the deal.

Iligan forged a tie with Pagadian with identical 1-1 records.

Niño Ibañez led the fight for the Explorers with 16 points and six rebounds, while Mag-Isa, Fuentes, and Keanu Caballero all got 11 points apiece. 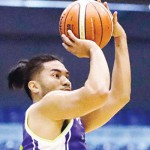