Giannis Antetokounmpo chipped in 21 points for the defending NBA champion Bucks, who used a strong fourth quarter run to seize control against the Spurs after suffering through a blowout loss to Miami two nights earlier.

“Just find a way to bounce back,” Middleton said. “It’s just how you adjust, how you respond to that. I think tonight, for the most part, the effort was in the right place.”

The banged-up Bucks played without starting centER Brook Lopez and Donte DiVincenzo and Bobby Portis, who usually contribute scoring off the bench.

The game was the second of a road-home back-to-back for the Spurs, who flew back to San Antonio Saturday morning after a loss in Denver on Friday.

Elsewhere, the Cleveland Cavaliers posted their first win of the new season, with a 101-95 win over the Atlanta Hawks thanks largely to a 23-point performance from Ricky Rubio.

Rookie Evan Mobley finished with 17 points and 11 rebounds and Jarrett Allen had 11 points and 14 rebounds for the Cavaliers. Collin Sexton, Kevin Love and Lauri Markkanen each scored 12.

Trae Young led the Hawks with 24 points, including 15 in the first half. Cam Reddish came off the bench to score 19 but Cleveland struggled shooting the ball, making just 10 of 34 from the three-point line.

Tim Hardaway added 25 points for the Mavericks, who won for the first time this season after losing their opener Thursday in Atlanta. 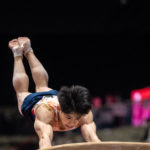