SAN FRANCISCO, CA - OCTOBER 21: Stephen Curry #30 of the Golden State Warriors celebrates during the game against the LA Clippers on October 21, 2021 at Chase Center in San Francisco, California. NOTE TO USER: User expressly acknowledges and agrees that, by downloading and or using this photograph, user is consenting to the terms and conditions of Getty Images License Agreement. Mandatory Copyright Notice: Copyright 2021 NBAE Noah Graham/NBAE via Getty Images/AFP (Photo by Noah Graham / NBAE / Getty Images / Getty Images via AFP)

LOS ANGELES (AFP) – Tyler Herro scored a team-high 27 points as the Miami Heat set a club record for most points in a season-opening game by hammering the reigning NBA champion Milwaukee Bucks 137-95 on Thursday.

Jimmy Butler delivered 21 points and Bam Adebayo had a game-high 13 rebounds for the Heat, who used a 26-2 first quarter run to bust the game open and never look back.

The previous team record for points in a season opener was 128 against Detroit in 1999, and the largest margin of victory was 26 points in 2000 over Orlando.

Six-time all-star Kyle Lowry made his debut for the Heat but was held to just five points on one-of-eight shooting.

The Bucks never led in the contest and went nine straight minutes without a field goal in the first quarter.

Giannis Antetokounmpo finished with 15 points and 10 rebounds while Khris Middleton scored just 10 points in the loss.

The Heat shot 53.1 percent from the floor and 42.9 percent on three-point attempts while the Bucks shot 28.6 percent from beyond the arc.

“I thought our guys just really stuck with it,” said Warriors coach Steve Kerr. “Steph Curry, he is just Steph Curry. There has never been anybody like him. Those last two threes were ridiculous.”

Elsewhere, Trae Young picked up where he left off last season, scoring 19 points and dishing out 14 assists as the Atlanta Hawks humbled the Dallas Mavericks 113-87 in Atlanta.

Young had 28 double-doubles last season for the Hawks, who are 24-6 on their home court since the end of February.

The victory spoiled the Dallas coaching debut of Jason Kidd, who recently took over from Rick Carlisle.

In 33 minutes of playing time, Young shot six-of-16 from the floor, including two three-pointers.

Luka Doncic also had a double-double to lead the Mavericks, finishing with 18 points, 11 rebounds and seven assists. He shot six-of-17 from the floor.

Reserve Cam Reddish led the Hawks with 20 points as all five Atlanta starters scored in double figures, including John Collins, who tallied 16 points and nine rebounds.

Clint Capela had 12 points and 13 rebounds. 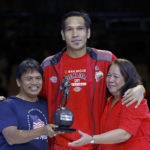