The Canadian of Filipino descent showed grit to recover from an opening-frame hiccup and reach the fourth round of this Masters tournament.

Fernandez, seeded 23rd, held her serve to take a 4-2 lead in the third set and maintained the composure to prevail over the French Open finalist in two hours and 41 minutes.

The 19-year-old Fernandez  hopes to continue her impressive run after reaching the finals of the US Open last month.

This marks the second time that Rogers and Fernandez will be facing each other. They last faced in the 2020 Lexington event where Rogers won, 6-2, 7-5, in their Round-of-16 affair.

Apart from her impressive run  in the US Open where she reached the final, Fernandez boasts of a No. 28 ranking compared to Rogers’ No. 44.

It was another big day for Fernandez as she and American partner Coco Gauff advanced to the quarters with a 6-3, 6-2 win over the duo of fifth seed Nicole Melichar-Martinez of the United States and Netherlands’ Demi Schuurs.

The unseeded Fernandez and Gauff opened their campaign with a 6-1, 6-1 win over Begu and Czech Republic’s Renata Voracova. 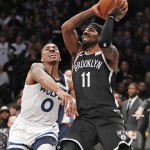