Boxing legend and senator Manny Pacquiao declared that his boxing career is already over.
Pacquiao said this when he was asked by television personality and host Toni Gonzaga.
“Boxing career ko? Tapos na ‘yong boxing career ko (My boxing career? My boxing career is already over),” said the 42-year-old Pacquiao. “Tapos na kasi matagal na rin ako sa pagbo-boxing at ‘yong pamilya ko laging nagsasabi na tama na. Nagtuloy-tuloy lang ako kasi passionate ako sa sports na ito.”
Pacquiao, however, earlier said that he will make an official announcement next month once he decided to run for President of the country for the 2022 elections.
The boxer-turned-senator formally accepted his nomination for the presidential bid by the Partido ng Demokratikong Pilipino-Laban (PDP-Laban) led by Senator Aquilino “Koko” Pimentel III on Sunday, Sept. 18.
After his bout against super WBA welterweight champion Yordenis Ugas, different scenarios floated whether Pacquiao is still up for a rematch or will finally hang up his gloves for good.
In a certain interview with ESPN, Pacquiao, the only eight-division world boxing champion, said he’s mulling retirement following his unanimous decision loss against the Olympic Cuban boxer.
Several reports also stated that a possible rematch or a future match still awaits Pacquiao in early 2022.
While Pacquiao remains committed to his political duties at this time, the Filipino boxing icon is planning to provide support for other pugilists instead of fighting once more.
“Magsu-support na lang ako ng mga boksingero para magkaroon tayo ng champion ulit,” said Pacquiao. 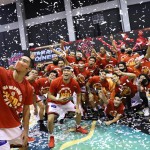