There’s no rest for the weary as far as Robert Bolick’s concerned even after winning all three games of their Bacolor campaign in the PBA Philippine Cup.

The Batang Pier have taken over the spot of the Terrafirma Dyip as the feel-good story of the Philippine Cup eliminations after picking up wins over the Blackwater Bossing, the aforementioned Dyip and NLEX Road Warriors.

NorthPort’s rise to seventh position at 4-3 came after failing to see action in the first week of the resumption due to the league’s health and safety protocols.

The team also had to do more than usual, with team manager Bonnie Tan filling in and some players providing inputs while coach Pido Jarencio and his assistants recover from COVID-19.

And after those three games, with the last held in back-to-back days, Bolick feels that their inspired play has given them the opportunity to aspire for bigger things going into the last four games of the eliminations.

Bolick’s average of 19.3 points on 57-percent shooting in the past three games has been the main reason for NorthPort’s success during the streak.

But others have also been key, like rookie Jamie Malonzo whose weekend has seen a number of dunks against Terrafirma followed by a double-double effort in the following day versus NLEX.

Veteran Sean Anthony has also been productive both on the court and the sidelines, sometimes drawing up plays during timeouts.

Sidney Onwubere and Paolo Taha have also been vital for the Batang Pier during the weekend matches despite Greg Slaughter getting tossed against the Dyip and missing the Road Warriors clash due to hip problems.

NorthPort’s remaining opponents are league-leading TNT, Magnolia, streaking Rain or Shine and Alaska, with the dates to be determined soon. Bolick and company are hoping by then that Jarencio, his staff and Slaughter can return in their quest to continue their good run of form. 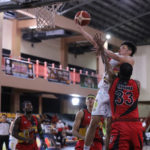