NEW YORK (AFP) – When Leylah Fernandez was cut from a Canadian youth tennis development program, her father Jorge, an Ecuadorian soccer player, became her coach in a sport he knew almost nothing about.

What he did know was how to be a professional athlete and he infused his daughter with mental toughness, patience, focus and confidence – the same attributes he learned the hard way on the football field.

The results have made his daughter, a left-hander who turned 19 on Monday, a formidable force at this year’s US Open.

”With him being my coach, him teaching me, just being competitive in sports has definitely impacted my game and my mentality,” Fernandez said.

”I’ve been working hard, training super well. My coach, my dad, is saying be patient, have confidence in your game, it will show in matches. I’m glad it finally did.”

World number 73 Fernandez, who will face Ukraine’s fifth-seeded Elina Svitolina in a Tuesday quarter-final, won her first WTA title in March at Monterrey.

Fernandez, whose mother is of Filipino heritage, is also guided by pro coach Romain Deridder. Her father is at home but still sending in plans for matches.

”My dad, he would tell me what to do, like for tennis-wise, just give me a game plan, and I try to execute it as much as possible,” she said.

”He’s at home with my younger sister. He has been calling every day, telling me what to do, so it has been great.

”He’s just telling me what to do in the day before and then he trusts in me and my game that I’m going to execute it as much as I can.

”He decided to stay back, but he has his reasons, and obviously his reasons are working tremendously right now.”

Fernandez has a confidence built upon years of work, running sprints when she made too many errant shots to hone her skills and toughen her for the challenges she now faces.

”I’ve always had that belief. I’ve always tried to use that in every match that I go on.”

Fernandez has her mother and fitness coach in her box cheering her on, as well as having become a fan darling with crowds at Arthur Ashe Stadium.

”Having them cheering me on every point has been very helpful. In those tough moments when I’m feeling down, with their positivity I was able to get back into it and forget about the mistake that I just did,” she said.

”Keep fighting, keep pushing through. Just, like I said, have fun on the court and trusting my game. Having fun on the court, I think that’s the key to anybody’s success.”

The upsets she has pulled off have added to the joy she feels at living the tennis dream that once seemed dead.

”I did have to pinch myself a little bit to see that it actually happened,” Fernandez said of her two upset wins. 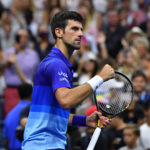