Veteran Cuban boxer Guillermo Rigondeaux is looking forward to the two-week showdown between boxing stars from the Philippines and Cuba.
Rigondeaux, the regular WBA bantamweight champion, will take on WBO titleholder John Riel Casimero at the Dignity Health Sports Park in Carson, California on Aug. 14 while Filipino boxing legend Manny Pacquiao will clash with super WBA welterweight champion Yordenis Ugas at the T-Mobile Arena in Las Vegas, Nevada on Aug. 21.
“Filipinos and Cubanos haven’t spent this much time together since the Spanish war. No hate here. Nothing but respect for the Filipino people,” tweeted Rigondeaux, who holds a 20-1 record.
“They are humble, tough and are great karaoke singers,” he jested.

If there’s one exception though, Rigondeaux has been vocal in exchanging words with Casimero, the Filipino slugger known for his trash-talking outside the ring.
In a series of tweets, the 40-year-old Cuban boxer has been calling Casimero “blondie” for someone who is actually sporting blonde hair and gave a few warnings ahead of their duel for the Filipino’s WBO title.
Interestingly, the 31-year-old Casimero is fighting under the Manny Pacquiao (MP) Promotions owned by no less than Pacquiao and led by his right-hand man and president Sean Gibbons.
Casimero is on a six-match win streak with the latest coming from a technical knockout win over Ghanian boxer Duke Micah last September to improve at 30-4 record with 21 knockouts while Rigondeaux last saw action in February last year and scored a split decision victory against Liborio Solis of Venezuela.
Rigondeaux was the initial opponent set against Casimero as announced last April before the reinstatement once again as WBC champion Nonito Donaire withdrew from the all-Filipino showdown in the bantamweight division.
In April 2013, Rigondeaux beat Donaire to defend his super WBA super bantamweight title and capture its WBO counterpart at that time.
After Saturday’s first PH-Cuba battle, Pacquiao and Ugas will highlight the second one as the two dispute the latter’s super WBA welterweight belt.
Pacquiao, who used to own Ugas’ belt, got stripped of the title due to inactivity and the WBA named him “champion in recess” initially before rejecting his appeal for reinstatement. 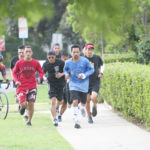