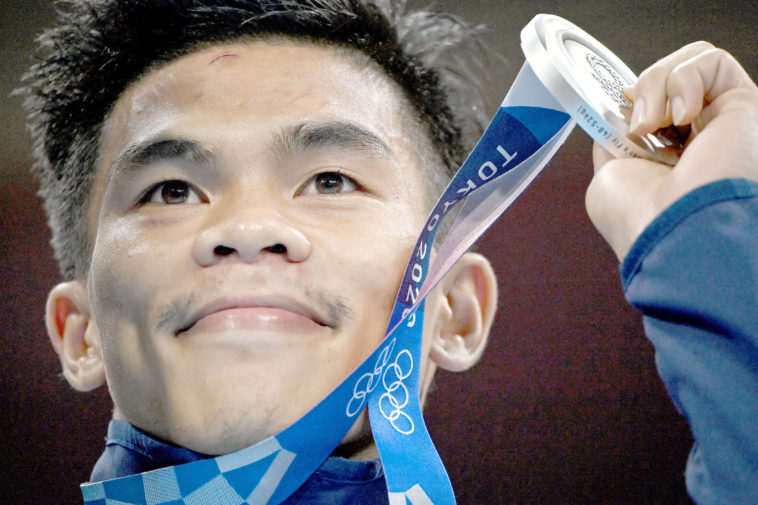 Philippines' Carlo Paalam celebrates his silver medal during the medal ceremony for the men's fly (48-52kg) boxing final bout during the Tokyo 2020 Olympic Games at the Kokugikan Arena in Tokyo on August 7, 2021. (Photo by Luis ROBAYO / POOL / AFP)

TOKYO — Farewell for the Philippines’ Carlo Paalam in the XXXII Olympiad came at the fast hands of a crafty, calculating opponent from Great Britain, with a wicked left straight and amazing foot speed.

Paalam took the silver medal in the 48-52kg final Saturday against British Galal Yafai, who won the gold 4-1 behind a first round show of force that saw the Filipino flyweight taking a standing count with 1:48 left.

The Philippines thus wrapped up its pandemic-delayed Olympic campaign with a historic first-ever gold medal courtesy of weightlifter Hidilyn Diaz, silvers by boxers Nesthy Petecio (featherweight) and Paalam, and a bronze from middleweight Eumir Felix Marcial — a four-medal performance the surpassed the country’s three-medal collection 89 years ago in the 1932 Los Angeles Games.

Petecio, meantime, will be the designated flag bearer in Sunday’s closing ceremony at the National Olympic Stadium.

Yafai set up Paalam with a right during a fierce exchange near the British’s corner and then followed it up with a thunderous left to the face that brought Paalam down.

The 1-2 punch was part of a four-punch barrage unleashed by Yafai that completely stunned Paalam.

“I was actually surprised that Carlo went down,” said Yafai. “But I tried to capitalize on that lead and I’m just glad I won.”

The 23-year-old from Upper Carmen, Cagayan de Oro City took the count after quickly getting up on his feet. He fought valiantly to keep the scores close but was tagged repeatedly by Yafai, who cut him off at every turn in sweeping the first round.

Noted for his patience and effective in-and-out style, qualities that helped brought him to the gold medal bout with four victories, including a quarterfinal upset of the 2016 Rio Olympics champion and a dominant semifinal win against the hometown bet, the Olympic first-timer turned into a slugger and found his match against someone who picked his spots magnificently and proved adept at counterpunching.

Paalam fought on sheer courage and instinct in the second round, managing to sneak in a few hits that convinced one of the five judges that the round was his.

He appeared to rock Yafai at one point, wobbling him a bit, but the British got out of potential trouble with long lefts that snapped Paalam’s head and stopped his momentum, before moving out of range.

The third round was largely mandatory, with Yafai fending off Paalam’s desperate lunges, throwing jabs and slipping away whenever he gets cornered.

Paalam said his opponent’s fight plan played a factor in the outcome.

The knockdown was the clincher though, Paalam believes.

“My gratitude to team ABAP; 4 boxers going home with 2 silvers and 1 bronze, we’re very proud of all of you. Sumbag Pinoy!

“Salamat sa lahat ng supporta PSC, POC at MVPSF. Without your support we could have not achieved this level of performance. Sana nandyan pa kayo in the future.

“Mabuhay, Team Philippines. To God be the glory!”

Meanwhile, over at the Kasumigaseki Country Club in Saitama, the Philippine women’s golf team, composed of Yuka Saso and Bianca Pagdanganan, wrapped up competition after four rounds.

Saso finished at joint ninth place, charging back in the last round with a 6-under par 65, her best score in the tournament.

Inami edged New Zealand’s Lydia Ko for runnerup honors after the two went into a playoff when they concluded the tournament with identical 268s. The Japanese won out with a par on the first hole to the Kiwi’s bogey.

Pagdanganan, who fired a 2-under par 69 in the opener before scorching heat and intermittent rains took hold of the course, came in tied at 43rd after a final round 74 that gave her a 1-over par 285 total. 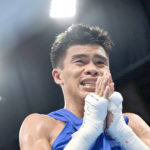