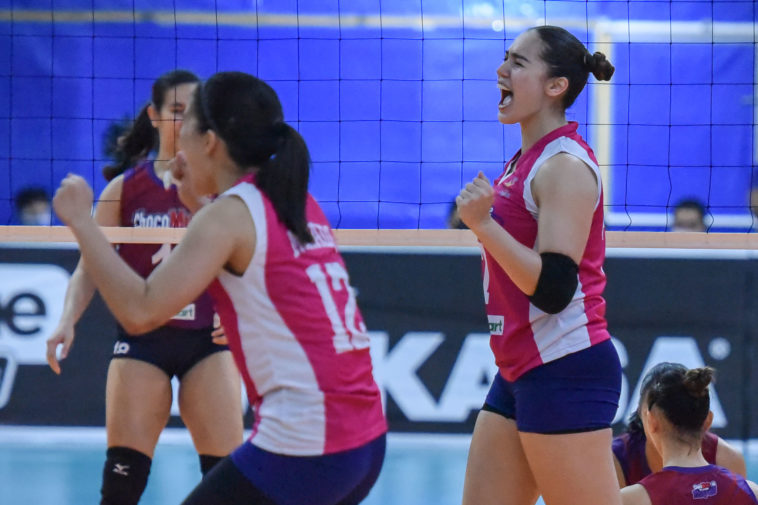 Led by star spiker Alyssa Valdez, the Cool Smashers kept their cool in the face of a 1-2 set deficit and went on to dominate the Flying Titans in the deciding fifth for the first seat in the final four with a 7-1 record.

Valdez pumped in 22 points anchored on 18 attacks, three aces and a block to lead a balanced offense as the defending conference champion Creamline coasted to a second straight win and snatched the No. 1 spot.

Creamline clawed its way back from a 10-14 disadvantage in the fourth set as Sato, Gumabao and Carlos sparked a 15-4 run to force the decider.

Valdez put on a showdown with Kat Tolentino early in the fifth before the Cool Smashers started to pull away through a 6-1 surge capped by Carlos’ crosscourt smash for an 8-3 lead.

It was all Creamline from there as Morado wrapped up the comeback win with a service ace.

Coach Oliver Almadro’s Flying Titans slid to a tie at No. 2 with opening game winner Chery Tiggo Crossovers. The two will tangle in the last elimination round match on Saturday, with the winner avoiding complications in entering the playoffs.

Star sisters Dindin Santiago-Manabat and Jaja Santiago fueled the fiery offense as the Crossovers zoomed to their third straight win for an overall 6-2 record, still good for the No. 3 spot behind Choco Mucho (6-0) and Creamline (6-1).

Dindin came through with 18 points built on 16 kills and two service aces while Jaja put up 15 markers on 12 spikes, two blocks and an ace for Chery, which could assure a seat in the final four with an upset victory over Choco Mucho in the last elimination round game on Saturday.