TOKYO — Twenty-five years after Mansueto ‘Onyok’ Velasco gave the Philippines its second boxing silver medal during the 1996 Olympics in Atlanta, featherweight Nesthy Petecio fights for a place in the gold medal bout Saturday in the XXXII Olympiad at the Kokugikan Arena.

A second Philippine boxer, flyweight Carlo Paalam, contends for a seat in the quarterfinals of the 48-52kg division against Mohamed Flissi of Algeria in an earlier bout at 10:45 a.m.

Over at the Kasumigaseki Country Club in Saitama, Juvic Pagunsan cooled down somewhat after a 5-under par 66 in the opening Thursday with bogeys in the 5th, 8th, 11th and 13 in the second round to slip at 2-over par 73 and 3-under for the tournament at 139 in a tie for 25th with two rounds to go.

His birdies came in the 6th, which he also birdied in the first round, and the 15th.

Petecio and Paalam climb the ring in search of glory at the heels of middleweight Eumir Felix Marcial’s first round RSC-1 mauling of Younes Nemouchi in the 69-75kg division for a quarterfinals berth last Thursday, July 29.

In their hands also fall the task of carrying the torch, along with Marcial, for Philippine boxing following the Round of 16 defeat of women’s flyweight Irish Magno to Jutamas Jitpong of Thailand in the 48-51kg category.

Petecio is giving away at least five inches in height to the 5-foot-8 Testa, ranked fifth at lightweight during the 2016 Rio de Janeiro Olympics and No. 1 in the 2019 European Championships in Madrid.

“Yeah, we have a game plan for the next fight,” said Abnett. “The Italian girl weighed 60kgs. She’s similar with the Taipei girl but she hooks and sways back. So we’re gonna take a counter act move, but I’m comfortable with Nesthy’s performance.”
The No. 2 ranked Petecio, barely breaking 5-foot-4, reached the quarters by taking out 5-foot-7 1/2 top seed Lin Yu-Ting of Chinese-Taipei via 3-2 split decision.

Of Paalam’s strategy against Flissi, Abnett intends to follow a winning formula which served Paalam well against a taller Brendan Irvine of Ireland, whom he beat also by split decision earlier.

“Carlo’s opponent is a very experienced boy,” said Abnett. “He’s boxing in WSB (World Series of Boxing). Carlo’s gonna get moving, similar to the game plan that he did in his last fight, he’ll probably just continue with that. If it’s working, then we won’t change it.”

Meanwhile, a short distance from where the Philippine boxers will be out rumbling for higher podium finishes, pole vault specialist Ernest John Obiena will bid to make the 12-man final as athletics officially comes off the blocks at the National Olympic Stadium, site of the Games’ opening ceremony last July 23.

Obiena, ranked sixth in the event, got a big scare and maybe some measure of relief Thursday after it was reported that reigning world champion Sam Kendricks of the United States has tested positive for COVID-19 and is out of the Games.

The U.S. Olympic and Paralympic Committee said in a statement that Kendricks, 28, had been moved to a hotel and placed in isolation.

“Nakakatakot din although ‘di naman nakasalamuha ni EJ sina Kendricks,” said Obiena’s father and coach, Emerson, who had taken up residence, with the rest of the pole vault team, in a hotel outside the Athletes Village after reports of rising cases there.

Obiena, who has a personal best of 5.87 meters, met the pole vaulters he would be competing against during a warmup round Friday morning.

Swimmer Luke Gebbie, meantime, was to compete in the 50m freestyle event at the Tokyo Aquatics Center early Friday evening. 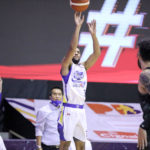