Most of them deem the film canonical.

Not because it made huge mark at the box-office.

Or that involved some of the country’s biggest stars.

The storyline, as adapted from a komiks series by Elena Patron, proved quite indelible.

That the film also highlighted hallmarks given to Philippine dramatic cinema only added to its continuing appeal.

Glaiza could only be happy being cast as Maita, a role originally played in the film by Lorna Tolentino.

“I feel honored to be chosen to reprise the role of Ms. Lorna Tolentino because she is one of the veteran actors I really look up to. She gives every role not only justice but truth and that’s always been my objective ever since. I’m looking forward to working with my co-actors especially Ms. Gina Alajar who was my first mentor in acting.”

Meanwhile, Claire admits feeling some pressure landing the role of Cielo but is beyond grateful for the support of her co-stars. “I didn’t expect it. Who would have thought na sa isang baguhang tulad ko ipagkakatiwala ‘yung malaking role. I am honored and pressured at the same time. Thankfully, my co-stars are approachable, very professional, and very kind. They helped me a lot. They are also very supportive to a newbie like me.”

To those not in the know, the story revolves sisters Maita (Glaiza) and Cielo (Claire), who have formed an inseparable bond since childhood.

Maita has always been protective of her younger sister Cielo but as the latter gets older, she starts to crave for freedom and exhibits rebellious behavior.

Their ordinary life takes an unexpected turn when Cielo gets abducted leading to an irrevocable tragedy. While she grieves, Maita’s boyfriend Alex (Rayver) becomes her source of strength and peace.

Will this strengthen Maita and Cielo’s relationship or is this the beginning of a fierce rivalry backed by suppressed jealousy, pretensions, deceits, and secrets? Can love for family be strong enough to forgive even the biggest of heartbreaks?

Catch the world premiere of “Nagbabagang Luha,” under the helm of Ricky Davao – beginning Aug. 2, after “Eat Bulaga” on GMA Afternoon Prime.

It will also be available for streaming via iQiyi International or IQ.com. 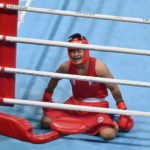