TOKYO — Team Philippines rebounded from a heartbreaking episode suffered late Sunday after Carlos Yulo’s misadventure in artistic gymnastics as flyweight Irish Magno followed Nesthy Petecio to the Round of 16 of the boxing competition at the Kokugikan Arena Monday.

Mixing control and punching power, Magno steered clear of complications by outboxing Christine Ongare of Kenya through three rounds 5-0 in the women’s 48-51kg Round of 32 bout.

The Iloilo boxer, who earned a ticket to the Games after winning a flyweight division (52kgs) box-off with a Tajikistan opponent at the Asia Oceania Olympic Qualifying Tournament in Amman, Jordan last year, will next face Thailand’s Jutamas Jitpong on July 29 for a seat in the quarterfinals.

Petecio, a unanimous decision winner over Marcelat Sakobi Matshu of the Democratic Republic of Congo in the  54-57kg category Sunday, shoots for a quarterfinal berth Tuesday against Chinese-Taipei’s Lin Yu-Ting, who drew a bye to the Round of 16 as the tournament’s No. 1 boxer.

While Petecio and Lin have never fought each other in a tournament, according to Association of Boxing Alliances in the Philippines executive director Ed Picson, the two sparred once in Bangkok in 2019 during the King’s Cup.

Making her presence felt in the tournament, Magno started strong, made the necessary adjustments in the middle round against the Kenyan, who gave away a few inches in height, and finished with a flurry.

Once in the first round, Ongare sought a timeout at the 1:45 mark to have her head gear adjusted after getting hit by a series of Magno combinations.

But it was all the respite the Kenyan boxer would get as Magno swarmed over her as soon as action resumed.

The fight apparently went according to plan.

“We analyzed the bout two nights ago, of the Kenyan and another African girl, and we put the tactics together and Irish was pretty comfortable with it,” said Don Abnett, the national boxing team’s Australian coaching consultant.

“In the end, we went to Irish’s bread-and-butter punches, straights to the head and the body.”

“Christine gave it all her best but she met a really good boxer,” he said.

Ricky Vargas, ABAP president, was thankful for the early wins.

“We are happy and grateful for this good start. Nesthy and Irish showcased their good preparation, determination and will to win,” said Vargas.

“But the road is long and we all need to hope and pray for contnued success. The men start tomorrow (Tuesday) with Carlo Paalam. We will be with him in prayer and spirit. And with Eumir Marcial as well when his turn comes (on July 29).”

With the women boxers safely in the Round of 16, men’s flyweight  Paalam makes his debut against Ireland’s Brendan Irvine Tuesday in the 48-52kg preliminaries.

Ranked No 5 in the world flyweight rankings, Paalam, 23, will take on the 25-year-old Irish, ranked 17th during the 2016 Rio de Janeiro Olympics. 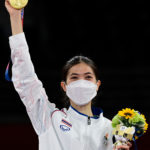