Cap: Nesthy Petecio reacts after being declared a huge winner over her taller rival. (AFP)

TOKYO – True to her word, Nesthy Petecio, the Philippines’ featherweight bet in the XXXII Olympiad, took the fight to her taller opponent from the Democratic Republic of Congo Saturday, scoring a comfortable 5-0 decision in the 54-57kg category at the start of the boxing competitions at the Kokugikan Arena Saturday.

The outcome of the Round of 32 preliminary was never in doubt for the 29-year-old Davao native, the reigning AIBA World champion, as she negated the longer reach of Marcelat Sakobi Matshu by wading inside and connecting with point-scoring stabs to the head and body.

Except for the American judge who saw it differently, Petecio garnered four 10s in the first round despite getting warned for throwing a punch with an open palm.

Even the dissenting opinion from among the officials at sideline was swayed though by Petecio in the next two rounds as she effectively fended off Matshu’s sudden aggressiveness which resulted in a warning for tying up the Filipina boxer following a furious exchange in the second round.

The final score was 30-27 from four, including the referee, and 29-28 from the American judge

After sizing up the Congolese at the start of the second, Petecio, on the instructions of Australian coaching consultant Don Abnett, started working inside and counter-punching to neutralize Matshu’s reach advantage.

Ahead in all cards, the No. 2-ranked Petecio wrapped up the fight in the third with 3-to-5 shot combinations that found their mark before she danced away the remaining time.

Next up for Petecio is Asian featherweight champion and tournament top seed Lin Yu-Ting, 25, who was seeded to the Round of 16.

Given her unfamiliarity with the Taiwanese, whom she had never faced before, Petecio said she will be banking on her long hours studying footages of Lin’s previous fights to gain the upper hand in their July 26 showdown.

Petecio’s victory cushioned the impact of the crushing loss suffered by lone Philippine taekwondo bet Kurt Bryan Barbosa, who absorbed a 26-6 beating at the hands of world No. 1 Jang Jun, 26-6, at the Makuhari Messe Hall A in the men’s 58kg category, the match suspended by virtue of the 20-point gap rule.

While Jang moves on to the quarterfinal stage, Barbosa will have to go through a wringer — a taekwondo repechage to stay alive for at best a bronze medal finish.

Two Day 1 events are still scheduled late Saturday — Carlos Yulo at the All-Around competition in artistic gymnastics, where he seeks to advance to the finals of his three favorite events — the vault, parallel bars and floor exercise, and swimmer Remedy Rule, a marine biology graduate at University of Texas at Austin, who will gun for a place in the semifinals of the 100-meter butterfly event at the Tokyo Aquatics Center.

Meanwhile, Day 2, Sunday, will feature rower Cris Nievarez paddling for a place in the top tier semifinals of the men’s single sculls at the Sea Forest Waterway in the Tokyo port area.

The draw Saturday afternoon will have Nievarez, from Atimonan, Quezon, contending for at least a third place finish against world class rowers from New Zealand, Brazil, Germany, Lithuania and Iraq.

Nievarez advanced to the quarters Friday morning after negotiating the 2000 meter course with the third best time behind Croatia’s Damir Martin and Russia’s Alexander Vyazovkin.

Up next in boxing Sunday is Irish Magno who takes on Kenya’s Christine Ongare in the women’s flyweight 48-51kgs Round of 32.

PH boxing coach Reynaldo Galido, a veteran of the 1996 Atlanta Olympics, said Magno has shown no ill effects of the minor misstep she suffered while jumping rope during training several days ago.

Magno, from Iloilo, qualified to Tokyo after winning the flyweight box-off against a Tajikistan opponent in the Asia Oceania Olympic Qualifier in Amman, Jordan last year.

Her Kenyan opponent, 25, placed third during the 2019 African Games.

Round out Sunday’s schedule for Team Philippines is shooter Jayson Valdez, who will compete in the men’s 10-meter air rifle event at the Asaka Shooting Range.

Valdez made it to the Olympics via the quota system, surpassing the minimum qualifying score of 595. He is the first Filipino shooter to qualify to the Olympics since Paul Brian Rosario in 2012 in London. 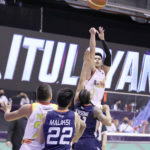