TOKYO  — The coronavirus health scare, which has reportedly affected more than 70 individuals so far inside the Olympic Village, has caught up with Team Philippines, forcing sports officials to send home a foreign head coach 24 hours before the opening of the pandemic-delayed 2020 Olympic Games.

Rather than risk intervention from the Tokyo Organizing Committee of the Olympic and Paralympic Games (TOCOG), which could result in severe action, including actual banishment of athletes for ‘close contact violation,’ Philippine Olympic Committee president Bambol Tolentino came out with the decision before noon Thursday.

This was relayed to Philippine delegation chef de mission and football president Nonong Araneta, who in turn forwarded the decision to TOCOG, hoping the preventive measure would avert any unwelcome probe.

“It is our decision, with the concurrence of the affected NSA (national sports association), to send the foreign coach home, regardless if his latest confirmatory test turns up negative,” said Tolentino at the lobby of the Conrad Hotel here.

Tolentino declined to identify the NSA involved or its coach.

The foreign mentor, who flew in from his home country Wednesday, has been running a fever and tested positive during a mandatory saliva test at the airport upon arrival, according to POC Secretary-General Ed Gastanes.

Two subsequent swab tests (RT-PCR), a team official said, came out negative, but the POC decided not to take any chances less TOCOG intervenes, especially if a third confirmatory test turns up positive.

In that case, the foreign coach, who may not have been tested before departure from his country, said a POC source, will have to be quarantined in Tokyo for 14 days before being allowed to leave.

If the latest test comes out negative, the coach will be asked to take the first flight out for home.

At present, Tolentino said, no red flag from TOCOG has been forwarded to them as to the status of any Philippine athlete, allowing relieved sports officials to assume all 19 representatives have the green light to compete in their respective disciplines.

Rower Cris Nievarez guns for a berth in the quarterfinals of the men’s single sculls event early Friday morning at the Sea Forest Waterway, hoping to set the tone for the country’s campaign.

A repachage is scheduled on Saturday, if necessary.

“No other concerns, wala na,” Tolentino said, a day after Araneta and lawyer Billy Sumagui, COVID-19 liason officer (CLO) for Team PH, bared that they had been going through several sleepless nights pondering how to deal with the foreign coach’s situation.

The Tagaytay representative and PhilCyling president did let on that a related case had been settled earlier, and that another one awaits resolution soon.

Tolentino, Gastanes and Philippine Sports Commission chairman Butch Ramirez will be the only Philippine officials present at the Olympic Stadium  early Friday evening to witness up close the parade of participating nations when the XXXII Olympiad begins without spectators, foreign and local, and minus the hype, pageantry and glitz attendant in all previous inaugurations.

Gymnast Carlos Yulo and pole vaulter EJ Obiena have earlier been tapped to serve as flag-bearers, but both were forced to forego the rare opportunity due to conflicts in competition and flight schedule.

Also, while the rest of the 19 athletes have been given the green light to join the parade, with some of them requesting to do so, team officials ultimately decided against it to prevent any possible viral infections due to the sheer number of delegates who will take part in the parade.

Tolentino said TOCOG could be expected to put on a grand spectacle uniquely apart from previous openings. 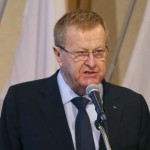