MANILA — Less than an hour before she boarded a Philippine Airlines flight for Tokyo where she is to meet up with gymnastics pride Carlos Yulo five days to the Olympic Games, the president of the Gymnastics Association of the Philippines (GAP) Cynthia Carrion, dipped a hand into her pocket and pulled out a rosary.

“I’m praying not only for Caloy but for all our Philippine athletes,” said Carrion in the boarding area at Terminal 1 of the Ninoy Aquino International Airport early Sunday morning. “And I hope everyone remains safe, that all would test negative.”

Reports of a Philippine delegate showing infection following a required swab test prior to departing for Tokyo, thereby prompting cancellation of the trip, has Carrion imploring divine providence fervently even more .

“This is an exciting thing, the Olympics, but I’m praying that nothing untoward will happen to any of us,” she said.

Carrion, who said she knew the identity of the sports official but wouldn’t divulge it, admitted that public expectations regarding Yulo’s chances of landing the country’s first Olympic gold medal had been weighing heavily on her mind more than on her ward.

The decision to relieve Yulo, gold medal winner in the 2019 FIG Artistic Gymnastics World Championships in Stuttgart, Germany, of the role of Philippine flag-bearer during the Games’ opening ceremony on July 23, Carrion said, was made with the prodigious athlete’s best interest in mind.

“They wanted him to be flag-bearer but competition starts the next few days, and it’s very important,” Carrion  said. “It’s overall and only eight gymnasts will be chosen for the finals on August 1, 2 and 3. So we said he better just relax, be more calm, stay in his room and be by himself.”

The effects of Yulo’s belated vaccination, administered on the advice of a high-ranking official of the international federation who cautioned against dire consequences should a mandatory test turn up positive, has long worn off, said Carrion.

“Caloy had tightness in his arm after the first dose, and fever after the second, but he was alright after one day,” she said.

As focused as Yulo is, and single-minded in purpose, the 12-year gymnastics chief nonetheless tries to shield the 21-year-old from outside distractions as much as she could.

Especially the ones that amount to tens of millions, as pledged by big business for potential Olympic gold medalists.

“I don’t tell him how much he would get if he wins, I only mentioned it to his coach,” said Carrion. “I only tell him always to do it for his country and for his family.” 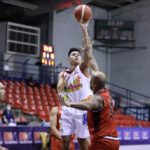